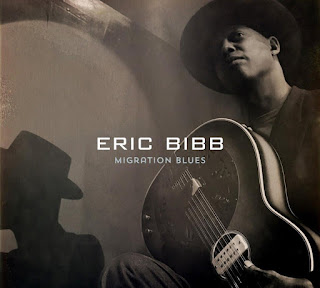 As I’ve said often before, Eric Bibb is one of the most inspired, and inspiring, of contemporary blues and folk artists. Eric has been quite prolific over the past two decades, releasing many studio albums, live albums and collaborative albums and the quality of his work has been consistently high. My best-of-the-year lists here on the Folk Roots/Folk Branches blog have included an Eric Bibb album for six of the past eight years – and they were on my lists many times before that when the Montreal Gazette was publishing my annual picks.

Migration Blues, a topical and timely set of songs about the migration of peoples and individuals – from country to country or place to place – is one of Eric’s most powerful and compelling collections.

Before discussing any of the songs, I’ll mention that this is an intimate recording. In addition to Eric, who variously plays various guitars and six-string banjo, the core musicians are multi-instrumentalist Michael Jerome Browne of Montreal on various banjos, various guitars, fiddle and mandolin; and harmonica master JJ Milteau of France. The three virtuoso musicians – whether all three or two at a time – are a seamless unit.

The album opens with Eric’s “Refugee Moan,” a haunting song sung from the perspective of a refugee praying for a way out of his war-torn country to find a home somewhere peaceful. The song is a universal plea that could apply to refugees from any of the conflicts that have plagued our world in recent decades – even recent centuries.

Other songs about refugees include “Prayin’ for Shore,” a heartbreaking account of refugees – such as the millions who have left Syria over the past six years, or the Vietnamese boat people of a generation ago, or the displaced Jewish Holocaust survivors attempting to reach pre-state Israel after the Second World War – who cross treacherous waters in flimsy boats because they have no other choice; and “Four Years, No Rain,” co-written by Michael and B.A. Markus, which reflects how combinations of war, drought and even terrorism affect refugees.

“Delta Getaway,” co-written by Eric and JJ, reflects the experience of a pre-war blues artist from Mississippi who witnessed a lynching and feared for his life in the Jim Crow South setting out to make his way north to Memphis and on to Chicago. A similar theme is voiced later in the album on “With a Dolla’ in My Pocket” and, to an extent, on “Blacktop,” an older song co-written by Michael and B.A. Markus and sung as a duet by Eric and Michael.

“Diego’s Blues,” co-written by Eric and Michael, tells the origin story of the son of a Mexican woman and African American man. Diego’s mother was one of the many Mexican migrants who’d arrived in the Delta in the 1920s to find work in an area experiencing a labor shortage because of the migration of African Americans leaving the rural South for the urban North hoping to escape Jim Crow; while “We Had to Move” – inspired by the story of James Brown’s family – describes the reasons why the people in one particular African American neighborhood were forced to migrate somewhere else.

There are three powerful instrumentals on the album. In the title track, co-written by Eric, Michael and JJ, you can virtually feel the footsteps of people on the move in the sounds of the instruments. In “La Vie c’est un oignon,” Michael’s fiddle and JJ’s harmonica wordlessly tell the story of the forced migration of 18th century Acadians from Nova Scotia, New Brunswick and Prince Edward Island to Louisiana where they became Cajuns; and in the short “Postcard from Booker,” Eric plays a guitar owned by the late blues artist Booker (Bukka) White in a tribute that perhaps reflects the traveling life that White led as a musician.

In addition to the songs written or co-written by Eric, Michael and JJ, there are also superb versions of Woody Guthrie’s “This Land is Your Land” (including the often unsung political verses) and Bob Dylan’s “Masters of War,” two songs which remain as powerful today as when they were written more than 75 and 50 years ago.

The album ends quietly with a beautiful version of the traditional African American spiritual “Mornin’ Train,” featuring Eric on vocals and guitar with Ulrika Bibb singing harmony and Michael setting the pace with his banjo.