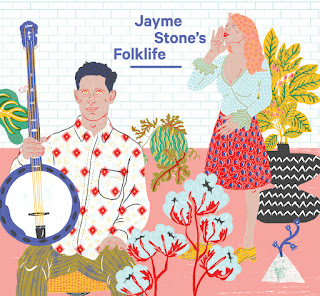 A little over two years ago, the masterful banjo player Jayme Stone released Jayme Stone’s Lomax Project, an superb album in which he and a revolving cast of singers and musicians reimagined 19 songs – mostly traditional folksongs – that had been collected by legendary folklorist Alan Lomax (1915-2002) over a period of many years. As I noted in my review, “it is an extraordinary collection at once timeless, traditional and utterly contemporary.”

Although the CD featured different musicians and singers on different tracks Jayme worked with more focused smaller groups when taking the Lomax Project out on the road. The superb Lomax Project concert that I got to see and hear – March 16, 2016 in Ottawa at the National Arts Centre Fourth Stage – featured Jayme with primary lead singer and accordionist Moira Smiley, bassist Joe Phillips and fiddler Sumaia Jackson. Moira and Joe had each appeared on about a third of the tracks on Jayme Stone’s Lomax Project while Sumaia was recruited sometime after the recording was completed.

While I went into that concert wondering if Jayme, Moira, Joe and Sumaia would be credible performing the often complex arrangements that had been played by other combinations of musicians on the CD, it was quickly obvious that the four had formed a wonderful, tight performing unit. It was one of the finest concerts I’ve seen in recent years.

Jayme Stone’s Folklife is the follow-up to the Lomax Project CD. At about 43 minutes and 10 songs it’s a shorter CD than the first one (which had 19 songs and clocked in at 66 minutes). But it’s a tighter, more focused group with nine of the 10 songs featuring the core group of Jayme, Moira, Joe and Sumaia – sometimes augmented by drummer Nick Fraser and/or harmony singers Felicity Williams and Denzel Sinclaire. And although most of the songs come from Lomax field recordings, there are a couple here that came through other collectors.

Although each of these tracks is a terrific performance highlighted by great playing and Moira’s charismatic lead vocals, a few of my very favorites include “Mwen Pas Danse” with its bouncy, breezy Caribbean rhythms; “Hey, Lally Lally Lo,” which I learned at summer camp in the 1960s as a singalong song that we’d improvise verses to, but which Moira turns into a sexy torch song; and the a cappella finale, “Wait on the Rising Sun,” with Moira’s lead vocals supported by Jayme, Sumaia, Joe, Felicity and Denzel in glorious harmonies.

“Buttermilk” is the only song on Jayme Stone’s Folklife not to feature the core musicians. On this song Jayme, on banjo, is joined by Dom Flemons who sings and plays guitar and quills (a panpipe flute made from cane reeds) and jazz musician Ron Miles on cornet. It’s a delightful, energetic performance on which you can also hear percussive bones playing – I assume by Dom who I’ve seen play them during his days with the Carolina Chocolate Drops.

As I said about Jayme Stone's Lomax Project, this album is “an extraordinary collection at once timeless, traditional and utterly contemporary.”

Posted by Mike Regenstreif at 5:17 PM