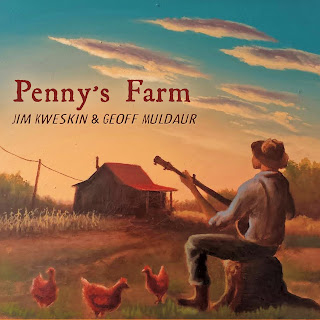 When I started collecting records obsessively in the 1960s, the LPs by Jim Kweskin & the Jug Band were – and remain – among my favorites. Drawing on folk songs, blues, jazz and early pop and novelty songs, the LPs were filled with fun, deceptively sophisticated, and an entrée into the older traditions and source artists they were drawing on. Well over 50 years after the Kweskin Jug Band got together and 40-something years since they broke up, Jim Kweskin and band stalwart Geoff Muldaur have reunited for the sublime Penny’s Farm, an eclectic collection of folk-rooted and folk-branched songs played by a couple of masters whose interpretive skills have aged like fine whiskey. Jim and Geoff each take the lead vocal on about half the tracks.

The album opens with Jim’s version of the traditional “Diamond Joe,” a song Alan Lomax collected from Big Charlie Butler at the Parchman Farm prison in Mississippi in 1939, and that has become familiar through countless interpretations by artists ranging from Cisco Houston to Ramblin’ Jack Elliott and Bob Dylan. Jim begins singing a cappella and is then joined by Suzy Thompson’s powerful fiddling, Jim and Geoff’s guitars, Cindy Cashdollar’s Weissenborn guitar and Geoff’s harmonies.

Jim continues to shine whenever he takes the lead vocal. Among his highlights are “Down on Penny’s Farm,” one of several songs on the CD drawn from Harry Smith’s seminal Anthology of American Folk Music, on which Jim plays banjo and Geoff is heard on pennywhistle; the infectious African song “Guabi, Guabi,” which he first recorded on a solo LP, Relax Your Mind, in 1965; a haunting version of “The Cuckoo,” also drawn from the Harry Smith Anthology and also a reprise from Relax Your Mind; and a couple of Mississippi John Hurt songs, “Louis Collins (Angels Laid Him Away) – which Philadelphia Jerry Ricks once told me was John Hurt’s very favorite of his own songs – and “Frankie,” a variant of “Frankie and Johnny (or Albert).”

Geoff’s first lead vocal is on “The Boll Weevil,” another folk song collected by Lomax that has become a folk music standard in countless versions. This version is among the best I’ve heard. Geoff is playing six-string banjo and is ably supported by Jim on harmony vocals and guitar, Suzy on fiddle, Cindy on Dobro and Kevin Smith on bass.

Geoff, too, shines, whenever he’s at the lead vocalist’s mic. His highlights include Henry Thomas’ “Fishing Blues,” also drawn from the Harry Smith Anthology; “Just a Little While to Stay Here,” a New Orleans funeral song Geoff recorded earlier on his wonderful album, The Secret Handshake; a couple of Beale Street Sheiks numbers, “Sweet to Mama” and “Downtown Blues” (Geoff first recorded “Downtown Blues” in 1967 on the Kweskin Jug Band LP See Reverse Side for Title); and a fun version of Mississippi John Hurt’s “C-h-i-c-k-e-n.”

My very favorite of Geoff’s tracks, though is his version of Bobby Charles’ beautiful “Tennessee Blues,” a song he recorded more than 40 years ago on Geoff Muldaur is Having a Wonderful Time. Van Dyke Parks joins the ensemble on accordion on this version of the song.

I’ll also mention that the CD package includes an appreciation of Jim and Geoff and the Jim Kweskin Jug Band by John Sebastian and informative song notes by Mary Katherine Aldin.