David Bromberg Band – The Blues, the Whole Blues and Nothing but the Blues 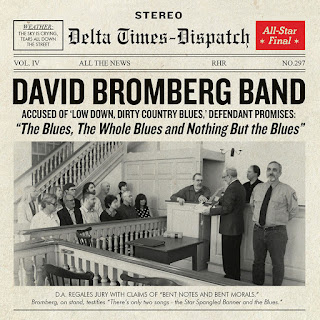 DAVID BROMBERG BAND
The Blues, the Whole Blues and Nothing but the Blues
Red House Records
davidbromberg.net

Most of David Bromberg’s albums, dating back to David Bromberg, his first solo LP released in 1971, have been wonderfully eclectic, drawing on a wide variety of styles and traditions, but, almost always with strong strains of the blues. This time around, as testified to in the album title, it’s an all-blues affair, just The Blues, the whole Blues and Nothing but the Blues.

But, even though this album is nothing but the blues, it is still remarkably eclectic thanks to the different approaches David takes on different tracks. Some are full band tracks, some are solo or almost solo. Some are electric, some are acoustic. Some are arranged Chicago style, others have an infectious jump or New Orleans or front porch feels.

The classic Chicago blues band sound developed as an electrified version of the Delta blues and that’s how David sets the tone for the album by opening with a grinding electric band version of Robert Johnson’s “Walking Blues.”

My favorite tracks on the album, though, are the acoustic tunes. Little Hat Jones’ “Kentucky Blues,” with it’s almost jug band style arrangement (there’s no jug) is a lot of fun. So is the New Orleans horn arrangement on Bessie Smith’s “You’ve Been a Good Ole Wagon,” while David’s solo guitar on Ray Charles’ “A Fool for You” is as expressive as a full band. My very favorite track, however, is the compelling version of the traditional “Delia” with David on vocal and acoustic guitar and producer Larry Campbell on acoustic slide guitar. David’s first recording of “Delia” was also my favorite track on his 1971 debut album but this version seems to come from even deeper in the well.

Among my favorite electric tracks are a version of “900 Miles,” the traditional folk song that David styles after Howlin’ Wolf; “Eyesight to the Blind,” an arrangement of a Sonny Boy Williamson song that jumps and swings with some terrific playing by fiddler Nate Grower and Bill Payne on organ; and a jumping, gospel-inspired version of “Yield Not to Temptation” with more great organ playing by Payne, a terrific horn arrangement, and a call-and-response chorus with David and back-up singers Nancy Josephson, Kathleen Weber and Teresa Williams.