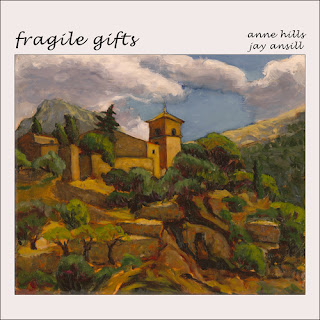 Anne Hills has been one of my favorite singers (and songwriters) for many years. In addition to her many superb solo recordings, she often collaborates with other artists. In fact, Anne has done so many projects with other artists that I once referred to her as “the queen of collaborations.”

Fragile Gifts is not exactly what I expected when I heard that Anne was making an album with Jay Ansill, who I’ve known for many years as a Celtic harp player. About 20 years ago, Jay released A Lost World, an album of his musical settings of poems by Robert Graves which featured a variety of singers on the different songs – including Anne on several. So what I expected was something along the lines of that earlier album; especially since several of the tracks on Fragile Gifts are settings of works by Graves and other poets. But Jay’s harp is heard only two of the tracks; instead, Jay’s work was in creating and recording classical arrangements – ranging from string quartet to full chamber orchestra – to accompany Anne’s vocals on a selection of material that included songs by Anne, songs co-written by Anne and Jay, and poetry settings by Jay. There is also an instrumental suite composed by Jay based on Spanish traditional music, and a lovely version of “The Scarecrow” by Lal and Mike Waterson.

The album opens with a new version of Anne’s sublime song, “Follow That Road,” a song in which she describes the best routes to take in each of the four seasons when coming to her house for a visit. I so love the guitar-based arrangement of the song on Anne’s 1995 album Angle of the Light, and that I’ve heard her do in live performances, that it took a few plays for me to warm up to this more formalized arrangement with the orchestra – but it is a lovely rendition.

“Lover’s Knot,” co-written by Anne and Jay, is also a reprise from Angle of the Light. While Jay accompanied Anne on Celtic harp on that fine first version, this rendition seems stronger, perhaps more confident with its chamber orchestra arrangement.

Among my favorite songs on Fragile Gifts is “Allie,” Jay’s setting of a Graves poem, and one of the songs on which he plays his Celtic harp. It’s a beautiful, lyrical song that pays tribute to the birds, beasts and fish of the animal kingdom – and to the children who are the future of humankind. Another is “Sonnet: Fragile Gift,” co-written by Anne and Jay, a meditation on feelings of loss following the death of a loved one.

The album ends with “Under the Olives,” a Graves poem beautifully set to music by Jay, which, in just seven lines, brilliantly captures the memory of someone looking back at the precise moment of falling in love.