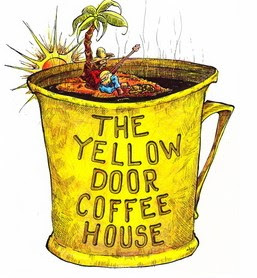 On November 12, I’ll be in Montreal with a bunch of old friends to help the Yellow Door Coffee House celebrate its 50th anniversary. While it used to be conventional wisdom that the Yellow Door started up in 1967, Marc Nerenberg, who was around at the beginning and has kept folk music going at the Yellow Door in recent years, has traced the coffee house launch back to 1966 – which means the Yellow Door is, by far, Canada’s longest-running folk venue, and one of the last surviving folk venues of the 1960s anywhere.

Back then, the Yellow Door was run by Chuck Baker and the format was to book lesser-known acts for three-night gigs from Monday to Wednesday and headliners for three nights from Thursday to Saturday. Sunday night was Hootenanny Night at the Yellow Door when performers – professionals and amateurs – put their names in the hat for chance to play three songs (or 15 minutes, whichever came first). As I recall, 12 performers got to play – in the order their names came out of the hat – on Hoot Nights.

In short order, I was a regular at the Yellow Door (and the Back Door) soaking up performances by almost everyone who played there. While some of them are largely forgotten, some became well known, and a few became legendary.

At some point in 1970 or ’71, I got involved in helping run the Yellow Door. I think Chuck just drafted me one night to work the coffee counter or sell tickets. I eventually did a lot of both, and then started to MC the occasional set. By 1972, I was MCing the Hoots every Sunday. Once in a while, when Chuck was away, I took over – even sleeping in his apartment on the Yellow Door’s top floor.

So, like so many performers who started out on the Yellow Door’s small stage, I got my start learning how to run folk clubs and concerts at the Yellow Door. In the fall of 1972, I started to produce folk music concerts at Dawson College and McGill University (while staying involved at the Yellow Door) and in the spring of 1974, I took over running another folk coffee house, the Golem, whose booking policy I modeled after the Back Door’s. And even though I’d moved on to the Golem, I was still around the Yellow Door a fair bit.

Perhaps my most memorable night at the Yellow Door was in the spring of 1972 when Jerry Jeff Walker and his guitarist (I recall his name being Travis something) happened to pass through town – I think they were en route from Ottawa to New York – and showed up at the Yellow Door on a Monday or Tuesday night. I was MCing that night and Jerry Jeff asked me if he could do a guest set. I told him that I’d have to clear it with the artist – his name was Merle Michaels, an American, I think, who was then living in Montreal and who I’ve not seen or heard of in the past 40 years. I asked Merle if it was OK for someone to do a guest set. “Sure,” he said, “Who?” At first he didn’t believe me when I said it was Jerry Jeff Walker. Anyway, after the show, maybe a dozen of us were on hand to hear Jerry Jeff play for about an hour-and-a-half without a break. He didn’t do “Mr. Bojangles” that night, but he did do “Stoney,” my request.

So, 50 years after the Yellow Door first opened as a folk music venue, and about 47 years after I first showed up at the basement coffee house, a bunch of us from the old days will join with today’s generation of Yellow Door performers to celebrate at a special 50th anniversary reunion concert, curated by Marc Nerenberg, on Saturday, November 12, 7:30 pm, at Petit Café Campus (57 Prince Arthur Street East in Montreal).

The MCs for the evening will be Chuck Baker, Marc Nerenberg, Mike Regenstreif (Hey, that’s me!) and Penny Rose.

Tickets for the anniversary concert are available on the Yellow Door website.


The anniversary weekend will also include several events at the Yellow Door itself (3625 Aylmer Street) including a Friday night Hootenanny, a free concert on Saturday afternoon and a brunch on Sunday. See the website for details.

Fifty years – half a century – imagine that. Congratulations to all who have played at the Yellow Door over the years – and especially to everyone who’s had a role in keeping it going against all odds for five full decades. It will be something to see everyone again.

Pictured: A drawing from the 1970s by Marc Nerenberg that is being used on 50th anniversary T-shirts; and Mike Regenstreif, Penny Rose and Jesse Winchester receiving the Yellow Door Award at the Yellow Door 35th Anniversary Concert, April 27, 2002 at Café Campus. (Photo: Judith Cezar)