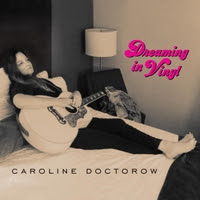 Music, for a lot of baby boomers like me, was big deal when we were young (and remains a big deal for some of us). Acquiring a new LP from a favorite band or solo artist was often a major event. The songs meant something to us and so many have stayed with us over the decades.

Caroline Doctorow’s new CD, Dreaming in Vinyl, is a reminder of those days. Eight of the 10 songs are seemingly timeless interpretations of songs that first came out between 1965 and 1970 while the other two – Caroline’s originals – evoke that period.

Almost all of the covered songs on Dreaming in Vinyl were instantly familiar to me as they were drawn from LPs I owned back in the day (and most of those I now have on CD reissues). And the only song I didn’t really know, “Hard, Hard Year,” was because it wasn’t on one of the Hollies’ LPs I did have back then.

Caroline’s versions of these songs remain quite faithful to the original versions. Her always-lovely voice is well served by her own guitar playing and overdubbed harmonies, by violinist Chris Tedesco, and by the layered accompaniment of producer Pete Kennedy on all other instruments. Among my favorites are Bob Dylan’s “Time Passes Slowly,” Paul Simon (Simon and Garfunkel)’s “Dangling Conversation,” which chronicles a couple’s growing alienation from each other, and Richard Holler’s poignant topical song “Abraham, Martin and John,” an iconic hit by Dion after the assassinations of Reverend Martin Luther King Jr. and Robert Kennedy.

The versions of the Lou Reed and John Cale (Velvet Underground & Nico)’s “Sunday Morning,” Randy Newman’s “I Think It’s Going to Rain Today,” Donovan’s “Turquoise,” and John Lennon and Paul McCartney (Beatles)’s “Across the Universe” are all also noteworthy.

As mentioned, Caroline’s two original songs evoke that period when we were buying vinyl LPs. “To Be Here” is a beautiful love song and travelogue. “That’s How I’ll Remember You,” is a lovely farewell written for Caroline’s father, the acclaimed novelist E.L. Doctorow, who died last year.