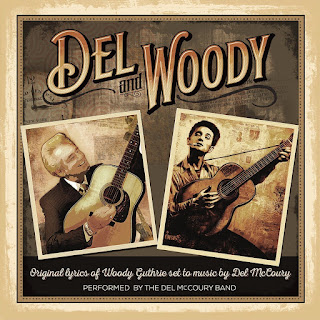 As I’ve noted before, “Woody Guthrie’s astounding writing career – not just songs; also books, poems, letters, newspaper columns and more – was brief, less than 20 years. He began in the mid-1930s and it was over by about 1954 when he was hospitalized with Huntington’s disease, the hereditary neurological disease that eventually robbed him of his life in 1967 at just 55.

“It wasn’t too much time after Woody’s death that I, as a teenager, discovered his songs, books and records. I’ve been listening and reading for [almost 50] years. More recently, I’ve been fascinated with the work that Nora Guthrie has been doing to bring the thousands of her father’s unheard songs back to life.

“When I first began listening to Woody Guthrie records, and to others doing Woody Guthrie songs, back in the 1960s, it was commonly said that Woody was so driven to write that he must have written about a thousand songs. Through Nora’s work at the Woody Guthrie Archives, we now know there were many more songs, about 3,000, and most of them have never been heard. Whatever tunes or melodies Woody wrote or adapted for them are forgotten or were never known.

“Over the past two decades, some of these songs have come to life in new musical settings by a wide variety of artists – some in album-length projects, some in one-off settings. Among my favorite album-length projects have been Wonder Wheel by the Klezmatics, Ticky Tock by the German artist Wenzel, and Note of Hope by various artists in collaboration with Rob Wasserman. What never fails to astound me is how wide-ranging Woody’s writing was – all of these newly come-to-light songs revealing more clues into the Guthrie mystery – and how adaptable his writing was to so many different styles and musical genres and how it continues to speak to very varied artists.”

Bluegrass legend Del McCoury is another of Nora’s great choices for setting Woody’s lyrics to music. Steeped in traditional bluegrass – he played guitar and sang lead vocals with Bill Monroe and the Blue Grass Boys for a time in the early-1960s – and is widely regarded as one of bluegrass music’s greatest standard bearers. He’s been unafraid of looking for material beyond the bluegrass rules and he’s done some great collaborations with artists ranging from Steve Earle to the Preservation Hall Jazz Band.

On Del and Woody, Del adds a dozen “new” songs to the Guthrie canon while creating one of the best bluegrass albums I’ve heard in years. The lyrics are all Woody’s set to melodies by Del.

The album begins in terrific form with “The New York Trains,” a song Woody wrote in 1940 after his first family – wife Mary Guthrie and their three kids – came by train from Texas to join him in New York. Woody humorously describes the family’s first exposure to New York’s expansive subway system.

Woody’s humor can also be seen in such songs as “Wimmen’s Hats,” a bumpkinny – but good-natured – spoof of women’s headwear; “Cheap Mike,” a complaint about a used car dealer who sold him a “‘48 motor on a ’32 frame”; and “Californy Gold,” a tale of a California Gold Rush prospector who loses his fortune to a gold digger.

Among the most poignant songs are “Left in This World All Alone,” sung by a man left without family or friends, and “Family Reunion,” in which Woody encourages families to stick together and support one another.

Other highlights include a love song, “Because You Took Me in Out of the Rain,” and “The Government Road,” sung from the perspective of an ex-con who finds employment building new roads.

Throughout the album Del, who sings lead and plays guitar, is supported by his virtuoso band – sons Ronnie McCoury on mandolin and Rob McCoury on banjo, Jason Carter on fiddle and Alan Bartram on upright bass, all of whom sing harmony vocals – perhaps the greatest traditional bluegrass band currently active.