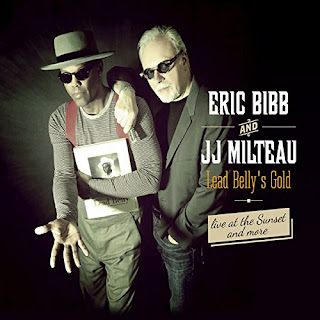 Lead Belly (Huddie Ledbetter, 1888-1949) was one of the most definitive and influential of all American folk and blues singers. He lived a life of a legend that included early years growing up in the Deep South at a time of intense racism and spent time in Texas and Louisiana prisons for killing two men. Legend has it that he sang his way out of prison in 1934, earning a pardon from the governor of Louisiana.

Lead Belly’s recordings from the 1930s and ‘40s, and his repertoire – songs that he wrote and traditional songs that he adapted – have been cornerstones of the folk and blues revivals from the 1930s to the present and his tremendous influence has also been felt by artists from other music genres from rock to jazz.

Pete Seeger, who was inspired by Lead Belly to play 12-string guitar, once told me that the greatest thing he ever did in music was to help spread the songs of Lead Belly and Woody Guthrie after they could no longer do so. And I have fond memories of sitting with Sonny Terry and Brownie McGhee – the first musicians older than my parents who I had the chance to get to know – as they told me stories about their friends Lead Belly and Woody Guthrie. I don’t think I ever saw Pete or Sonny and Brownie do a concert that didn’t include a Lead Belly song.

Eric Bibb is one of my favorite contemporary folk and blues artists and I’ve written about many of his terrific albums over the years. As the son of the late Leon Bibb, an acclaimed singer and actor who passed away last month at age 93, Eric grew up in a musical milieu in New York City in which Lead Belly songs would have been familiar to him virtually from birth. Now, Eric, who has lived most of his adult life in Europe, has teamed with French harmonica player Jean-Jacques (JJ) Milteau to record Lead Belly’s Gold, a magnificent collection of 13 songs from Lead Belly’s repertoire and three original songs written and sung from what they imagine to be Lead Belly’s perspective. The first 11 tracks were recorded in concert at the Sunset, a Paris jazz club, while the other five are studio recordings.

Each of the Lead Belly songs is a well-known classic, and even though I’ve heard each of them countless times over many decades, they all sound fresh and contemporary thanks to Eric and JJ’s outstanding performances.

Some of these renditions, notably the allegorical “Grey Goose” and the topical “Bourgeois Blues, are incredibly powerful. Some others, like “Bring a Little Water, Sylvie,” “Midnight Special,” “Pick a Bale of Cotton,” “Titanic” and “Rock Island Line,” are completely infectious.

Among my other favorites are the haunting renditions of “House of the Rising Sun” and “Where Did You Sleep Last Night.”

All three of the original songs – two written by Eric and one by Eric and JJ – are also excellent. “When I Get to Dallas,” is sung from the perspective of the young Lead Belly en route there to be a street singer. In “Chauffeur Blues,” which very appropriately follows “Bourgeois Blues,” Eric imagines how Lead Belly might look back at the indignity of being a servant for exploitative folklorist John Lomax after his parole. And, in “Swimmin’ in a River of Songs,” the album’s finale, Eric imagines Lead Belly looking back at some of the memorable events of his life, all experienced while “swimmin’ in a river of songs.”

As always, Eric’s singing and guitar playing is brilliant throughout and he is ably assisted by JJ’s fine harmonica playing and Larry Crockett’s drums and percussion. Gilles Michel plays bass on several songs while Michael Jerome Browne is on 12-string guitar and mandolin on “Swimmin’ in a River of Songs.” Michael Robinson and/or Big Daddy Wilson's backing vocals are heard on several songs. Wilson’s singing reminds me of Sam Gary’s singing with Josh White.