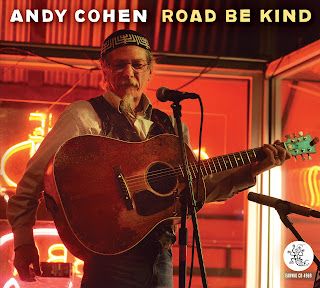 Five years ago, reviewing an album called Built Right on the Ground by Andy Cohen, I wrote an introduction that bears repeating.

It’s probably close to 40 years since the first time I encountered Andy Cohen. I was a teenager immersed in the folk scene and he would have been in his 20s and already an accomplished traditional blues revivalist. I think I first heard him when Bruce “Utah” Phillips got me to come down and hang out in Saratoga Springs where he was a prime mover in Wildflowers, a musicians’ co-op that also included Andy. Not too long after that, I recall him showing up in Montreal to play at the Yellow Door. I sat and listened closely to Andy play three sets a night for three nights in a row.

Thinking back to those days, I’m reminded of something the young Bob Dylan said about 10 years earlier:

“I ain't that good yet. I don't carry myself yet the way that Big Joe Williams, Woody Guthrie, Lead Belly and Lightnin’ Hopkins have carried themselves. I hope to be able to someday, but they're older people.”

Dylan’s point – I think – was that this kind of music is something you keep growing into, something that reflects your lifetime of experience. The truly dedicated revivalists of that period – people like the late Dave Van Ronk, the late “Philadelphia” Jerry Ricks, Paul Geremia, Roy Book Binder, Chris Smither, Martin Grosswendt, Rory Block and a few others, including Andy Cohen – have kept on getting better as they’ve gotten older. Listening to Andy now, in concert – I saw him do a house concert in Ottawa recently – or on this fine new CD, is a much deeper musical experience than it was, circa 1972, when I saw him at the Yellow Door.

I’ve repeated that review intro because it’s essentially the same thing I would want to say again now to anyone who might not know or be familiar with Andy Cohen.

Andy is best known as a traditional blues revivalist but, like many, perhaps most, of the songsters he studied and emulated – either directly or from old records – his repertoire is much broader than that and Road Be Kind – a solo recording, just Andy’s guitar and voice – also includes quite a bit of more contemporary and folk-based material. But even the most contemporary material here feels like it is right in the tradition.

Of that contemporary, folk-based material, I was quite pleased to be reminded of several songs by old friends, a couple of which – the late Luke Baldwin’s “Seldom Seen Slim” and Scott Alarik’s “Road Be Kind – I don’t think I’ve heard in decades.

“Seldom Seen Slim,” taken from Luke’s only LP, The Tattoo On My Chest, is a vivid portrait of a hermitic old desert rat, while “Road Be Kind,” an early song of Scott’s, is a lovely tribute to all the friends along the road who are vital to touring musicians’ survival and sanity.

Another song written by an old friend is “The Goodnight-Loving Trail,” by the late Bruce “Utah” Phillips, a bittersweet ode to an “old woman,” a trail cowboy too old or banged up to sit on a horse who is now the company cook. There have been many great versions of “The Goodnight-Loving Trail” over the years but none that capture the song’s heartbreak in the guitar arrangement the way Andy’s does.

Some of my other favorites include a slow, beautiful version of “Ten and Nine,” often known as “The Jute Mill Song,” a song written by Mary Brooksbank, a former Scottish mill worker and labor organizer, about the lives of women mill workers; Andy’s own “Five and Ten Cent Blues,” a tongue twister set to a snappy ragtime guitar arrangement; and “Mysterious Mose,” a great little ditty written for a Betty Boop cartoon from 1930. (Check it out on YouTube.)

There are also several fine instrumentals including a lovely, album-ending version of “Blackbird,” perhaps the prettiest melody John Lennon and Paul McCartney ever wrote for the Beatles.