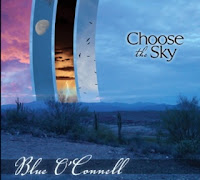 If Blue O’Connell had just chosen to perform instrumentals on Choose the Sky – six of its 13 compositions are instrumentals – it would be easy to simply applaud an album of often haunting, creative classical guitar or guitar/flute pieces influenced by sounds of nature and by strains of classical, folk, new age and Native American music. The compositions and the way she plays them on guitar and, occasionally, on flute, is spacious, calming and lovely.

The vocal songs, too, are spacious, calming and lovely. But, when Blue sings, the timbre in her singing voice quickly tells us that she is an unusual singer-songwriter. Hers is a voice obviously affected by a hearing disability – a disability she has not allowed to stop her from appreciating, making and sharing music.

A musician, since childhood, Blue began to progressively lose her hearing as a young adult. She continued to make music using hearing aids for more than 20 years until three years ago when she received a cochlear implant in one ear and a digital hearing aid in the other. She then had to undergo therapy and rehabilitation to understand and process sounds in a new a different way.

“All the while, I kept at my music even though it did sound very strange in the beginning,” she explains on her website.

There is a seeming innocence to Blue’s lyric writing that finds joy in the sights of the sky, that wonders how she will be affected by a spiritual encounter or where the inner muse for creating music comes from. Perhaps the most moving song is “To Belong,” an empowering declaration about overcoming disability.

While Blue performs solo on most of the album, a few songs are sweetened by contributions from cellist Peter Markush, harmony singer Mary Gordon Hall and guitarist Jeff Romano.

And while there may be a seeming innocence to her lyric writing and a seeming purity to her melodies, I can’t help but think that I’m just a little bit wiser from having listened to Blue O’Connell’s inspiring music.