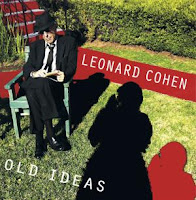 LEONARD COHEN
Old Ideas
Columbia
leonardcohen.com
The songs of Leonard Cohen have been an important part of my life since 1968, when – like almost everyone in Montreal (or, at least, English-speaking Montreal) into music and/or poetry – I sat down with his newly-released first LP, Songs of Leonard Cohen, a masterwork of songwriting. I lost myself in Leonard’s voice, his music and his words on that album. Especially the words. I’ve been listening to those songs, over and over again, and to the songs on every album he’s released since, and I still find layers of meaning and new ways to interpret so many of them. A well-established man of letters, a poet and novelist, who was well into his 30s before recording that first album, Leonard has never been a simple singer-songwriter churning out ephemeral pop music.
Even the songs on Leonard’s minor albums like Death of a Ladies Man or the somewhat uneven Dear Heather have kept me enthralled. And I’ve stayed enthralled when listening, over and over again, to albums like I’m Your Man built around mechanical-sounding, programmed keyboards, an approach to music-making I generally loath and have no time for in the hands of almost anyone but Leonard Cohen.
Curiously, despite using variations on that programmed keyboard approach on much of his recorded work since 1988, his concert tours in that same period have featured ensembles of world-class musicians and harmony singers and impeccable arrangements.
This brings us to Old Ideas, the song-poet’s latest masterwork. Recorded in the wake of a two-year world tour, the sound of music played by real musicians – happily – outweighs the mechanical sound of programmed keyboards. It’s very intimate music-making. The arrangements, mostly, are quiet, and Leonard’s singing, mostly, is conversational; conversational and hypnotically mesmerizing.
I referred to the album as a masterwork and, indeed, it is. Like so much of his best work, there are layers and layers of meaning and understanding that I think will continue to reveal themselves over a period of years of repeated listening.
That’s already started to happen for me with several songs, perhaps most notably with “Amen,” a long, prayer-like song, perhaps a conversation with God. At first, when Leonard sings that he’s “been to the river” and then makes reference to the “Laws of Remorse,” I thought, perhaps, the song was inspired by the Tashlich ceremony of the Jewish New Year, when the sins of the past year are symbolically cast into the water. I still think that’s part of what the song is about. On second and third listening, though, piecing together the different images – “the horror,” “the victims,” the “night [that] has no right to begin,” “the filth of the butcher,” “the Eye of the Camp,” and several others – I now think the song’s major theme is a deep rumination on the Holocaust; perhaps an attempt to address the most difficult question of modern Jewish philosophy: how could God have allowed the Holocaust to occur?
Another song I’ve interpreted differently on subsequent playing is “Crazy to Love You,” which Leonard performs solo – just his voice and nylon-string guitar. On one level, it’s seemingly a song about craziness we go through – early in a relationship – in trying to mold ourselves into who we want the romantic object our desire to think we are. But, then, I thought maybe it’s about the craziness that performing artists – singers, actors, etc., even poets – go through in establishing the character or persona under which they perform.
Among my first favourites is “Banjo,” which seems to use an image of a broken banjo floating on the sea as a metaphor for something that is personal and important that has been lost. Maybe I’m over-interpreting here, but when the brass section comes in midway through the song with its echoes of a New Orleans second line march, I couldn’t help but think the broken banjo floating out there represents all the music-making that was lost to Hurricane Katrina.
Although much of Old Ideas ponders such major themes as love, human mortality and spirituality, it’s not an album bereft of humour. In the opening song, “Going Home,” Leonard sings about himself in the third-person. Is it his inner muse singing about his outer person, or, as Freud might have it, his super-ego singing about his ego and id? Or, is it just Leonard having some fun?
And speaking of humour, look at the album cover. Leonard, in his trademarked black suit and hat, sitting in a backyard in the sun. So much of his work suggests the hours of night, of darkness, but there he is, sitting in the sun.
I suppose one of the beauties of Leonard’s work is that it’s so open to interpretation. Every song on Old Ideas is layered with ideas – the ideas Leonard had when he wrote the songs, and maybe more that continued to grow; and certainly the ideas that each of us, individually, hears and develops from listening and endlessly re-listening to the songs. What I hear in these old ideas is not necessarily what anyone else hears, or, even, what the poet – part Jewish mystic, part Zen monk – might have intended.
Almost four-and-a-half decades after Songs of Leonard Cohen, at age 77, Leonard has produced yet another impeccable, compelling, masterpiece.
--Mike Regenstreif
Posted by Mike Regenstreif at 8:38 AM