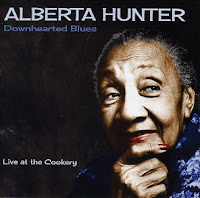 ALBERTA HUNTER
Downhearted Blues: Live at the Cookery
Rock Beat Records
en.wikipedia.org/wiki/Alberta_Hunter
Back in the 1970s and early-‘80s I used to get to New York City several times a year. One of my great pleasures in being in New York was getting to spend time in the company of the great Dave Van Ronk.
One night Dave asked me if I’d heard Alberta Hunter perform yet. One of the greatest of the classic blues singers of the 1920s and ‘30s, Hunter, by then in her 80s, had recently resumed performing again after many decades spent working as a nurse in a New York hospital.
When I told Dave I hadn’t seen a Hunter show, he marched me over to a club called the Cookery, for a marvelous set by the elderly, but still energetic, performer. Accompanied by a pianist and bassist, she was entrancing singing old songs like dating from her early career 50 and 60 years before, as well as great versions of several tunes from later decades. It was a very similar show to one recorded in December 1981 and now released as Downhearted Blues: Live at the Cookery.
Hunter's excellent accompanists on the live album are pianist Gerald Cook and bassist Jimmy Lewis, who, from the sound of things, I'd guess, were probably the musicians I saw her perform with.

Listening to the CD, I’m so reminded of that night I spent at the Cookery listening to Hunter, still great, singing classics from early in her career like “Down Hearted Blues” and “The Darktown Strutter’s Ball,” new material like “Remember My Name” and “The Love I Have For You,” and other great tunes like “Georgia On My Mind.” And on songs like “Handy Man,” Hunter, in her mid-80s, still knew how to exude a raunchy sexiness.
I would consider all of Alberta Hunter’s recordings, from her earliest sides in the 1920s through to the comeback albums she made in the ‘70s and ‘80s, to be essential. This live album is an important addition to her catalogue.
--Mike Regenstreif
Posted by Mike Regenstreif at 5:35 PM