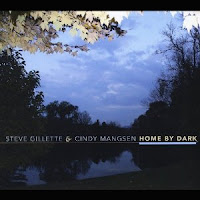 STEVE GILLETTE & CINDY MANGSEN
Home By Dark
Compass Rose Records
compassrosemusic.com
Individually, Steve Gillette and Cindy Mangsen had well established reputations in the folk music world long before they met, married and began touring and recording together as a duo (while also maintaining their both their solo careers and collaborative efforts with other artists). Steve has been an A-list songwriter since first making his mark in the 1960s with “Darcy Farrow,” a standard of the folk repertoire since Ian & Sylvia recorded it in 1965, while Cindy’s reputation as a fine interpretive singer – particularly of traditional ballads – dates back to the 1970s.
Over their years together, I’ve noticed the influence that Steve and Cindy have had on each other. Steve is less concerned with singing his own songs than he is in singing great songs whether he wrote them or not (and he still writes great songs) while Cindy has become a fine songwriter herself while still remaining a sublime interpreter of traditional music. All of that is on display on Home By Dark, their fifth album as a duo (mixed among various solo efforts and collaborations with other artists).
Steve and Cindy almost evenly split the lead roles on this album. Among Steve’s highlights are his version of Doug Johnson’s “Holy Smoke,” which uses Native American legends in a song about the California wildfires wrought each year by the Santa Ana Winds, and his two original songs, “The California Zephyr,” co-written by Denise Fleming,” and “Home By Dark.” The former is a sad portrait of a woman riding the train that runs between Chicago and San Francisco, broken by alcohol and lost in her memories of a love that’s long gone (or perhaps was never requited). The latter is a poignant circle-of-life song that begins with a childhood memory of hopping on a bicycle to explore the immediate world with just the need to be “home by dark” and moves on to a father’s contemporary desire to leave the demands of the daily working life early enough in the day to be “home by dark” to spend the evening with his children.
Cindy’s highlights include a stunning and haunting version of “The Two Sisters,” a compelling tale of sibling jealousy and murder, her own equally haunting “Seal Harbor,” based on the traditional stories of the seal folk, which she introduces with her setting of Rudyard Kipling’s “Seal Lullaby,” and a beautiful version of “Some Boats,” written by Anne Hills, another of Cindy’s frequent collaborators.
Other highlights include their delightful duet on “The Gnu,” a hilarious song from one of Flanders & Swann’s shows, and a couple of instrumental medleys – “Rosmini’s Rag,” featuring some fine guitar picking by Steve in a tribute to Dick Rosmini, a great guitarist of the 1960s who lost his battle with ALS in 1995, and “Manomet Waltz/The Mathematician,” featuring some equally fine concertina playing by Cindy.
--Mike Regenstreif
Posted by Mike Regenstreif at 5:08 PM