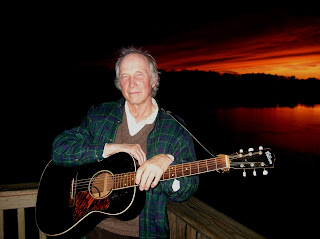 I got into Montreal from Ottawa late Friday afternoon, logged onto my e-mail to find several messages letting me know that my old friend Jack Hardy had passed away after a short battle with lung cancer. I didn’t know that he was sick. Apparently, he’d been diagnosed just a few weeks ago and only his family and just a few of his closest friends knew.
I first met Jack sometime around 1977 or ’78 when I used to spend two or three days at a time, two or three times a year, in New York City. Dave Van Ronk introduced us late one night and I learned quickly that Jack was a brilliant guy, a dedicated songwriter, and, perhaps, the world’s greatest champion of the art of songwriting. He was already on his lifelong mission to help anyone dedicated to the art of song-craft find and develop their voice. He was the guiding light, the guru, of the new song movement in New York City.
For almost as long as I knew him, Jack hosted a Monday night songwriters’ exchange in his flat on Houston Street. He’d gather songwriters there, feed them a pasta dinner and then they’d exchange brand new songs. He had a rule that the songs had to be less than a week old. Hundreds of songwriters – including some of the most respected songwriters of our time – passed through Jack’s apartment on Monday nights over the past 30-plus years.
Early on, though, those Monday night songwriters’ exchanges were held at the Cornelia Street Café in Greenwich Village and I remember sitting in one night and listening. One of the songwriters there was a very young Suzanne Vega. Jack pointed her out to me as someone to watch out for. I think it was about five years before her first album would come out. He knew.
Those were the years that I was working as a booking agent on the folk scene. Although he wasn’t one of my clients, I did a little work on Jack’s behalf getting him a couple of key gigs and trying to get a couple of the important folk labels that I worked with interested in him. I really thought then – as I have continued to think over the years – that he was a great songwriter.
One of my fondest memories of Jack was when I booked him to perform at the Golem, the folk club that I was running in Montreal. It must have been sometime in 1982 or ’83. Jack came up to Montreal with two sidemen – his brother, Jeff Hardy, on bass, and guitarist Frank Christian. They did a wonderful concert for a modest audience and we all had a great time crashing at the small apartment I had then and seeing the sights of Montreal.
I saw less of Jack in the 1990s and 2000s; probably no more than two or three times each decade. I wasn't going to New York City anymore and Jack never made it back to Montreal. But we’d cross paths occasionally at a festival somewhere and it was always great to see him. Those were the years that I was hosting Folk Roots/Folk Branches on CKUT and I played his songs a lot over the years – including an extended feature in 1995.
After Jack’s brother Jeff died in the World Trade Center on September 11, 2001, I wrote to him to say how sorry I was. I think several months had passed when Jack called to thank me for writing. We spoke at length that night; a conversation I treasure having had.
Jack died much too young and with many more songs to write. He will be missed. But he does live on in the songs he left for us and in the influence that he had on so many of his contemporaries and on the countless songwriters who have followed in his wake.
My condolences to Jack's family and to all of his friends.
Posted by Mike Regenstreif at 9:52 PM