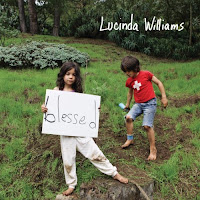 I read a review of Blessed, Lucinda Williams’ new CD, before I had a chance to actually sit down and listen to the album. The critic gave the album a lukewarm review, damning it with some faint praise while seeming to lament that Williams is currently happy in her life; suggesting that she writes much better songs when she’s unhappy.

Reading the review, I worried I wouldn’t like the album. I needn’t have. Blessed – like virtually every other album Williams has released – is a superbly crafted set of songs. Being of a similar age to Williams, it’s more than OK with me that she’s writing mature songs that reflect the life experiences of our generation.

And, in any case, many of the songs on Blessed do reflect the kinds of themes of anger and sadness that Williams has always dealt with so brilliantly.

The CD opens with “Buttercup,” an angry kiss-off to a former lover or friend set to an intense, rocking arrangement. It’s followed by the quieter “I Don’t How You’re Livin’,” in which Williams expresses sadness at the fact that the person she’s singing about – perhaps the same former lover or friend of the previous song – has isolated him or herself from her.

Several songs deal with questions of mortality and death. In “Copenhagen,” she’s far from home trying to make sense of a death of someone who was obviously close. In “Seeing Black,” apparently inspired by the death of songwriter Vic Chesnutt, she addresses a series of rhetorical ‘why’ and ‘how’ questions to someone who has committed suicide; while in “Soldier’s Song,” Williams movingly contrasts the life of a soldier about to die in battle with that of his wife and child waiting at home.

I also really like the more positive songs on the album. “Born To Be Loved,” is kind of a love song, but, more than that, it’s a song of affirmation about what it means to be human. “Blessed” and “Awakening” continue that affirmation finding life’s blessings in all of the ordinary and extraordinary encounters that we experience in life.

And in a pair of beautiful love songs, “Sweet Love,” and “Kiss Like Your Kiss,” Williams reflects the happiness that comes with true and lasting love.

Williams only rocks hard on a couple of the dozen tracks. Most of the arrangements are the kind of trademarked acoustic settings that allow a listener to be transported by Williams’ luxuriant voice, and by her perceptive words and sweet melodies.