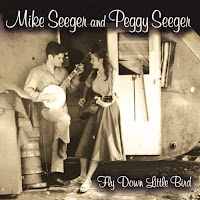 MIKE SEEGER & PEGGY SEEGER
Fly Down Little Bird
Appleseed
mikeseeger.info
peggyseeger.com
Siblings Mike Seeger (1933-2009) and Peggy Seeger (born 1935) came from one of the most important American musical families. Their parents were the pioneering musicologist Charles Seeger and the composer Ruth Crawford Seeger – both of whom became deeply involved with traditional folk music in the 1930s; their older half-brother is legendary folksinger Pete Seeger.
Both Mike and Peggy have had long, important careers in folk music. Mike was a traditionally-based solo singer and multi-instrumentalist, a member of the New Lost City Ramblers, a folklorist and collector, and a collaborator with countless artists ranging from Jean Ritchie to Bob Dylan. Peggy is a singer of both traditional and contemporary songs, an important songwriter, and was, for many years, the musical (and life) partner of the late Ewan MacColl, one of Great Britain’s most important and influential folksingers.
Growing up in the 1930s, ‘40s and ‘50s, surrounded by traditional music and musicians, Mike and Peggy were each other’s first musical collaborators. Although they collaborated on a few occasions over the years, their musical careers – and bases-of-operation – diverged over the decades. But they still always looked forward to making music together and less than a year before Mike passed away from a fast-moving cancer, they recorded this set of traditional folksongs they remembered from their youth.
The album opens with Mike and Peggy’s a cappella sibling harmonies on “Old Bangum,” an old ballad about a hunter and a wild boar, the kind of animal whose accomplishments are purely the province of tales and ballads. Their singing sure sounds like it comes from a lifetime of familial harmonizing.
Save for “Red River Jig,” a Canadian fiddle tune and the album’s lone instrumental, the songs are all rooted in Southern Appalachian song traditions. They include versions – great performances all – of such familiar songs as “Cindy,” “The Dodger Song,” “My Home’s Across the Blue Ridge Mountains” and “Little Birdie.” Mike and Peggy know just how to communicate the essence of these songs so that they seems as relevant now as they did 60 or more years ago when they first sang them, or in the lost times and places in which they were first sung in the kitchens and on the front porches of the rural South.
In addition to their singing, both Mike and Peggy play instruments that vary from song to song. Mike is heard on banjo, harmonica, banjo-guitar, fiddle, Hawaiian guitar, cello-banjo, guitar and mandolin. Peggy variously plays guitar, piano, banjo and dulcimer. A bassist, Leo Lorenzoni, who plays on just one song, is the album’s only other musician.
I’ve always enjoyed both Mike and Peggy in their individual musical pursuits – this collaboration, though, is something very special. I know Peggy. I’ve written about her often and she was my guest on the Folk Roots/Folk Branches radio program a couple of times during her visits to Montreal. I also knew Mike a little bit and got to work with him several times over the years at folk festivals. I wish I’d had opportunities to hear them sing together in person.
--Mike Regenstreif
Posted by Mike Regenstreif at 10:01 PM