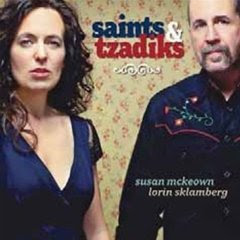 (This review is from the September 21, 2009 issue of the Ottawa Jewish Bulletin.)

I recently wrote about superb collaboration between trumpeter Frank London and singer Lorin Sklamberg – both of the Klezmatics – on Tsuker-zis, an album of Chasidic religious songs. Here is another superb collaboration of Sklamberg’s, this time with the sublime Irish Celtic singer Susan McKeown.

This is not the first time the pair has worked together. Several years ago, when the Klezmatics recorded Wonder Wheel, their Grammy Award-winning settings of Woody Guthrie’s Jewish-themed songs, McKeown sang duets with Sklamberg on several songs that called for a woman’s voice.

On Saints & Tzadiks, Sklamberg and McKeown take Jewish folksongs in Yiddish and Irish folksongs in Gaelic or English and mix them together, seamlessly singing in the language of their own and each other’s cultural heritage, occasionally mixing the languages into the same song – all to stunning results on each of the dozen selections. The CD booklet, by the way, places English translations next to the Yiddish and Gaelic lyrics so that not understanding either language is no hindrance to enjoying the album.

Some of these songs, like “My Little Belly,” a hypochondriac’s litany of woes sung in Yiddish, the bilingual Yiddish-English version of “The Rattlin’ Bog,” or “The Hag with the Money,” sung in Gaelic, are a lot of fun. Other’s, like “Buenos Aires,” about Jewish girls from Warsaw being sold into white slavery during the First World War, or “The Dark Slender Boy,” sung by Sklamberg in English and McKeown in Gaelic, are beautiful and poignant.

The album’s masterpiece is a song called “Prayer for the Dead,” which weaves together verses from “Johnny I Hardly Knew Ye” with a Yiddish lament for dead soldiers dating from the First World War, and a dirge dating from a millennium ago that is partly in Latin and partly in Irish Gaelic, forming a universal prayer for all who have been lost to war and for a world without such killing and dying.

Saints and Tzadiks is one of the finest albums of the year.

Posted by Mike Regenstreif at 5:59 PM