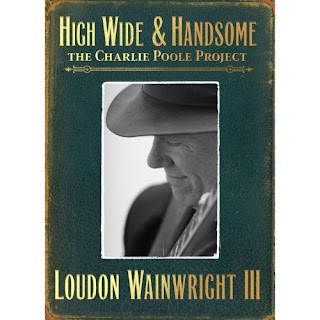 I’ve known Loudon Wainwright III for a long time. I first met – and heard him –when he was married to my friend Kate McGarrigle in the early-to-mid-1970s. After the marriage broke up, I’d occasionally see him at Kate’s when he’d come up to Montreal to see Rufus and Martha (who both sing on this album) and booked him a time or two for concerts at the Golem when he’d come to town for those visits. In 2000, we sat down and did an extensive interview on Folk Roots/Folk Branches.

Like many others, I first heard Charlie Poole songs as done by the likes of Doc Watson, the New Lost City Ramblers and the Holy Modal Rounders; and by Poole himself on Harry Smith’s monumental Anthology of American Folk Music.

All that to say, I really had no idea –- until I saw some videos about this project that producer Dick Connette posted on Facebook -– that Loudon had an affinity for the music of –- or the character that was -– Charlie Poole, one of the early stars of country music, and a somewhat tragic figure who died in 1931 at just 39. But maybe I should have figured on the Wainwright-Poole connection. In his notes, Dick talks about “the humor, the clarity, the simplicity, the wise guy attitude, and, occasionally, an unapologetic emotional sincerity.” Dick could have used those words to describe the Loudon Wainwright that I’ve known for more than 35 years, but he was actually talking about what attracted Loudon to Poole.

This project, a tribute to Poole, is unlike anything Loudon has ever done before. About two-thirds of the 30 tracks on this beautifully packaged 2-CD set are songs Poole recorded back in the 1920s. The rest are new songs written by Loudon and/or Dick about Poole, or from a perspective he might have had.

The album opens with Loudon-as-Charlie singing the title song, “High Wide & Handsome.” At least I think he’s singing as Charlie as he strums the banjo in a solo performance. This is a song that also seems somewhat autobiographical.

From there, Loudon sings gets deep into the Poole repertoire with six creatively arranged numbers including “Took My Gal Out Walking” and “I’m the Man Who Rode the Mule Around the World,” and then a couple of Dick’s songs: “Old Ballyhoo,” a kind of dyslexic folksong, and “Little Waterloo,” which Dick adapted from Poole’s recording of “Leaving Home.” (I really like the way Dick takes old folksongs and makes them into something that is simultaneously new and old. He did a lot of that on two Last Forever albums with Sonya Cohen that I really like.)

The album continues like that: more Poole songs or songs written by Dick and/or Loudon. They’re all quite wonderful and varied in their arrangements and choice of back-up musicians and singers. Some of my other favourite songs include “The Deal,” a great version of Poole’s biggest hit, aka “Don’t Let Your Deal Go Down,” which features some hot mandolin picking by Chris Thile; a jazzy take on “Moving Day” featuring great harmonies by the Roches; and a bluegrass-meets-jugband-and-jazz version of W.C. Handy’s “Ramblin’ Blues.”

There are also three terrific tracks in which Loudon retreats from the spotlight. “The Great Reaping Day” is an a cappella gospel song featuring lead vocals from Montreal’s own Chaim Tannenbaum along with Loudon, David Roche, Lucy Wainwright Roche, Maggie Roche and Suzzy Roche supplying sublime harmonies. “The Man in the Moon,” co-written by Loudon and Dick, has Maggie Roche singing as Poole’s wife, and “Ragtime Annie” is an instrumental that’s left to the virtuoso chops of fiddler Dana Lyn, mandolinist Chris Thile and guitarist Rob Moose. As well, Loudon and daughter, Lucy Wainwright Roche, do a lovely duet on "Beautiful," a gospel song that Poole performed but never recorded.

This is an exceptionally well done project. Kudos to Loudon, Dick and all of their collaborators.