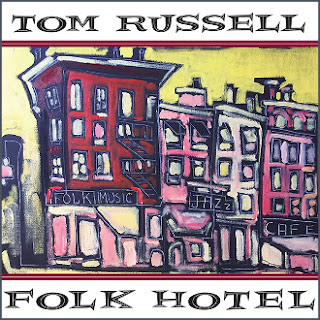 I checked into the Folk Hotel when I was a teenager in the late-1960s. Tom Russell, who is about five years older than me, was already there. Both of us encountered many of the same legendary figures who were there before us – legends whose spirits loom large over Folk Hotel, Tom’s brilliant new masterwork; a collection that comes hot on the heels of Play One More: The Songs of Ian Sylvia, a wonderful tribute to a couple of the legendary residents who were already on the upper floors of the Folk Hotel before either of us got there.

There are 14 tracks on Folk Hotel – 13 written or co-written by Tom – and every one of them is worthy of great praise.

The album open s with “Up in the Old Hotel,” a song inspired by stories and legends of New York’s Chelsea Hotel, a residence favored by writers, musicians, actors and artists for more than a century. References to “Ma and Pa Kettle on the radio,” Louis Armstrong singing “I Guess I’ll Get the Papers and Go Home,” and the death of Dylan Thomas, who died at the Chelsea in 1953, suggest a timeframe for the narrator sweetly singing about “falling in love up in the old hotel.”

Although Tom was conjuring images from another time in the opening track, the second song, “Leaving El Paso,” is a reflection of his own life. Tom lived for many years in El Paso, across the river from Juarez, Mexico, until he and his wife Nadine Russell sold their place a couple of years ago and moved to Santa Fe, New Mexico. The song features wonderful playing by Joel Guzman on guitar and Red Volkaert on Spanish guitar and, like many of Tom’s border ballads from his El Paso years, has a lovely Tex-Mex feel.

A conversation with Canadian folk and cowboy music legend Ian Tyson – with whom Tom has co-written a bunch of songs including “Navajo Rug” and “When the Wolves No Longer Sing” – inspired “I’ll Never Leave These Old Horses.” Describing Ian in the verses and channeling him in the chorus, Tom lets us in on why Ian, well into his 80s, won’t give up the hard life on his Alberta ranch.

“The Sparrow of Swansea (For Dylan Thomas),” co-written by Katy Moffatt and recorded by her on the 1996 album Midnight Hotel, is an older song that Tom never released himself. But, in the context of the Folk Hotel, it’s one that needed to be here. It’s a lovely song – with harmony by Eliza Gilkyson – that captures the seemingly contradictory beauty of Thomas’ poetry and the rage of his alcoholism.

“All on a Belfast Morning,” introduced with the recitation of “He Stumbled Home from Clifden Fair” by Irish poet James H. Cousins, is a Tom Russell song steeped – like some of the songs Tom wrote for The Man from God Knows Where – in the Irish folk tradition. The alcohol that flowed through “The Sparrow of Swansea” is here, too, but, so, too is the wisdom of the poets and the Irish ballad singers.

In “Rise Again, Handsome Johnny,” Tom recalls a fleeting encounter he had as a young boy with presidential candidate John F. Kennedy in 1960, the assassination of the president in 1963, and a high school football game he played that day. There’s an infectious Mississippi John Hurt vibe to the arrangement courtesy of Max de Bernardi’s fine fingerpicked guitar playing.

He doesn’t say so in the song, but I think the title protagonist in “Harlan Clancy” is one of those fed-up white voters in Ohio who probably supported Barack Obama in 2008 and 2012 but went for Donald Trump out of frustration in 2016. “I ain’t no racist, I ain’t no redneck,” sings the character as he explains his frustrations. Without specific reference to the Trump campaign, the song helps provide a measure of understanding of why some voters might have gone that way. (By the way, I’m writing this review the day after the racist, anti-Semitic, neo-Nazi rally in Charlottesville, Virginia and I’d like to think that the Harlan Clancys of this world would be appalled by what happened there and by Trump’s response.)

Tom relates a dream in “The Last Time I Saw Hank” in which imagined memories of Hank Williams and Jesus intermingle with real (or really possible) memories of George Jones and his parents.

“The Light Beyond the Coyote Fence” is a song from Tom’s life. The coyote fence describes the fence around Tom and Nadine’s new house in Santa Fe that is meant to keep the coyotes out and on “Some nights we can see light of fires as Indians dance/And the eyes of God shine through the coyote fence” – but, mostly, it’s a song about being a traveling folksinger, about what that lifestyle entails, and about the refuge from that lifestyle that the home inside the coyote fence represents.

I think “The Dram House Down in Gutter Lane” is the third part of a trilogy begun in “The Sparrow of Swansea” and “All on a Belfast Morning” that helps us understand the thin, fragile edge and human frailties that have defined so many.

It’s followed by a three-part track – a poem, a short song, and a standard-length song: “The Day They Dredged the Liffey/The Banks of Montauk/The Road to Santa Fe-O.” The poem is a tribute to Irish writers that, in four short verses, references James Joyce, Samuel Beckett, Oscar Wilde, Brendan Behan, Patrick Kavanagh and William Butler Yeats. The short song references the first cattle ranch in the United States (on Long Island of all places) and leads into a love song in which Tom uses the template of an old folk whaling ballad to describe meeting Nadine, the Swiss woman who became his wife, and their journey to a new home in Santa Fe.

In “The Rooftops of Copenhagen,” Tom describes observing a real-life character in a Copenhagen bar, hearing the guy’s story from a waitress, and then – 20 years later – finding out how the story ends.

The only non-original on Folk Hotel has Tom conversationally trading verses with Joe Ely on perhaps the most beautiful ever version of the Bob Dylan classic, “Just Like Tom Thumb’s Blues.” Tom’s acoustic guitar and Joel Guzman’s accordion provide perfect backdrop.

Tom Russell, as I’ve said many times before and will, no doubt, say again in the future, is the finest songwriter of my generation. He proves it, yet again, on Folk Hotel.

Folk Hotel will be released on September 8 but is now available for pre-order at Frontera Records. You can also order the companion book which contains all the lyrics, Tom’s thoughts on the songs, some stories from the Folk Hotel and Tom’s original paintings inspired by some of the residents.

I will be featuring several songs from Folk Hotel during a multi-artist feature on “Songs of Tom Russell” when I host the August 19 edition of the Saturday Morning show (7-10 am EDT) on CKCU. Listen live at 93.1 FM in Ottawa or live or on demand (after the live show) on the web at ckcufm.com.