Catherine MacLellan – If It’s Alright With You: The Songs of Gene MacLellan 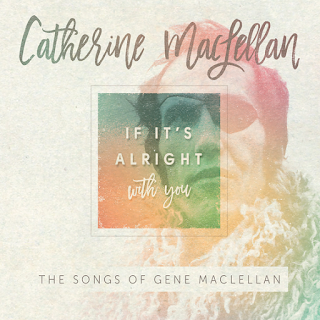 I remember Gene MacLellan (1938-1995) as a performer I’d occasionally see on CBC-TV programs from the Maritimes like “Don Messer’s Jubilee” and “Singalong Jubilee” and as the songwriter behind several big hits for Anne Murray like “Snowbird” (which sits on my record shelves in a version by Doc Watson) and “The Call” and the gospel crossover hit “Put Your Hand in the Hand” (which I have in a version by Joan Baez), and as the father of Catherine MacLellan, an accomplished singer and songwriter in her own right whose work I have greatly appreciated over the past decade or so.

On If It’s Alright With You: The Songs of Gene MacLellan, Catherine, who was a young teenager when she lost her father, pays tribute to her father’s songwriting legacy by interpreting – and, occasionally, reimagining – 13 of his songs.

It’s the two biggest hits that are most radically reimagined – making them both standout tracks on an album with no weak links. As an Anne Murray hit, “Snowbird” was bright, bouncy and infectious. Catherine, though, slows the song down, and accompanying herself on electric piano with no other musicians, finds the poetic heartbreak at the essence of the lyrics and lovely melody – and includes a seemingly essential verse that Murray did not sing.

“Put Your Hand in the Hand” is also performed in a much less flamboyant style than Ocean’s hit version allowing the emphasis to shift away from the singalong chorus to the verses’ story. Catherine on lead vocal is beautifully supported by J.P. Cormier and Dave Gunning on guitars and harmony vocals.

My favorite track on the album is Catherine’s duet with John Connolly on “The Call,” another hit that her father wrote for Anne Murray (perhaps my favorite of all of Murray’s many hits). The song, a panhandler’s plaintive plea, has a quietly infectious melody that is beautifully stated here by the nylon-string lead guitar work of Chris Corrigan.

Among the other standouts are “Bidin’ My Time,” a gentle country song beautifully sung over an arrangement also highlighted by Corrigan’s lead guitar playing; “Faces,” which captures deep feelings of loneliness and depression; and “Shiloh Song,” which seems like a song of encouragement sung by a parent whose circumstances might dictate too much time away from his kids.

Along with the release of this album, Catherine has also created a new stage show, “If It’s Alright With You: The Life and Music of My Father, Gene MacLellan,” that she is performing through September at the PEI Brewing Company in Charlottetown. And Catherine will be bringing much of the show to her National Arts Centre concert here in Ottawa on November 9.