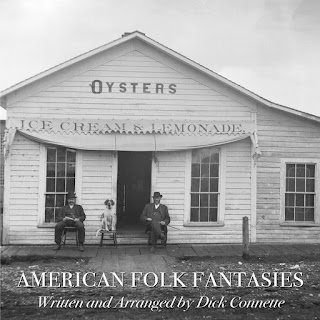 
For 20 years, since the release of the first CD by Last Forever, I’ve greatly admired the work of composer/songwriter/producer Dick Connette. In Last Forever, he teamed with the late vocalist Sonya Cohen to produce several albums of completely reimagined traditional songs and original songs steeped in tradition. I continue to find great musical riches whenever I return to the Last Forever albums – which I have done often.

Much of the material on Vol. 1 – Oysters Ice Cream Lemonade: American Folk Fantasies Written and Arranged by Dick Connette, his new project – recorded under the group name ‘Too Sad for the Public’ – continues in the vein of Last Forever with original songs based on traditional themes and a couple of fascinating covers of pop songs. The lead vocals are in the capable hands of Suzzy Roche (four songs), Rachelle Garniez (one song), Ana Egge (two songs) and Gabriel Kahane (one song).

All of the vocal songs on the album are entirely praiseworthy. Perhaps my favorite, if I had to pick just one, is “Black River Falls,” sung by Suzzy. The melody and chorus are based on Karen Dalton’s version of the traditional folksong “Same Old Man,” and the verses, each of which stands on its own, are based on Michael Lesy’s book. Wisconsin Death Trap.

Other favorites include “Old Alabama,” sung by Ana, which takes its inspiration from several traditional songs, most notably “Old Country Rock,” a country blues first recorded by William Moore in 1928 (the group name, Too Sad for the Public, comes from a repeated line in this song); and “Orphée in Opelousas,” sung by Gabriel, Dick’s reimagination of the Orpheus legend from Greek mythology which he sets in Louisiana to a score based on traditional Cajun songs.

I also love what he’s done with the two covers. “He’s a Bad Boy,” sung by Suzzy, was written by Carole King and Gerry Goffin in the early-1960s. As John Cohen of the New Lost City Ramblers (and Sonya Cohen’s father) pointed out to Dick, the song is a teenage variation on “Stagger Lee.”

“Young Loves to Love,” sung by Ana, is a medley of two early Van Morrison songs – “Brown Eyed Girl” and “Sweet Thing.” The latter song came from Astral Weeks (my second favorite Morrison album) and the arrangement is reminiscent of it – and prominently features the nylon-string guitar playing of Jay Berliner, whose playing was a key component of Astral Weeks.

The other theme that runs through the album is a tribute to the late Chuck Brown, a Washington, D.C. guitarist who was known as “The Godfather of Go-Go,” a form of funk music. This is first heard in “Liberty City,” a Jaco Pastorius tune that Brown quoted in one his own tunes. Dick offers three short passages from “Liberty City” as strategic interludes during the album. Then, as the penultimate track, there is the 12-minute go-go instrumental “Chuck Baby,” a direct tribute to Brown, whose intensity never stops swirling and building.

While the go-go tracks might initially seem an odd coupling with the folk-inspired material, Dick Connette and the musicians of Too Sad for the Public bring it all together in a way that just seems right.

Dick variously plays harmonium, piano, bass and bass drum throughout the album. In addition to the singers, he is joined by a core group of five musicians – including Chaim Tannenbaum on harmonica –and 12 other contributing musicians. Dick’s arrangements are masterful from the opening notes of the first track until the end of the album.