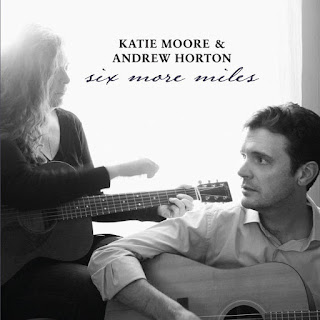 After several solo albums, Montreal-based country and folk singer-songwriter Katie Moore is joined by Andrew Horton for Six More Miles, a lovely set of (mostly) sad duets of eight country and folk classics and four original songs – two each by Katie and Andrew.

Katie and Andrew have a musical history together. Andrew played in Yonder Hill, a bluegrass band from about a decade ago that was fronted by Katie, Dara Weiss and Angela Desveaux, and has since played and sung in Katie’s bands. He also plays bass and sings harmony and occasional lead vocals in Notre Dame de Grass. They have developed a seemingly natural ease at singing together as lead and harmony vocalists.

They lead off the album with the title track. A lesser known Hank Williams composition, “Six More Miles (to the Graveyard)” sets the sad tone for the album as the narrator – Katie and Andrew singing in harmony – prepares to say a last farewell to his (her) “darling.”

A couple of my other favorites include a gorgeously haunting version of Bill Monroe’s “The One I Love is Gone,” that seems to come from deep in the well, and Shel Silverstein’s older but wiser song “A Couple More Years.”

Although there is a slow pace to most of these songs (they are, after all, sad songs), the pace does pick up on the traditional murder ballad (and sad story) “Wild Bill Jones” and the Carter Family classic “Lover’s Return.”

As mentioned, Katie and Andrew each contribute a couple of original pieces and these blend seamlessly with the classics. Katie’s “When We Reach the Valley” could easily be mistaken for an old-time country song while her “Blue Days” is an achingly beautiful song of lost love. Andrew’s “Since My Baby Been Gone” could be a companion song to “Blue Days,” while his “Owen’s Lullaby” is a gentle guitar composition – the album’s only instrumental – presumably written to send a baby off to sleep.

Katie and Andrew on vocals and guitars are ably and unobtrusively supported by Joe Grass on Dobro, mandolin and guitar; Alex Kehler on nyckelharpa (a bowed Swedish instrument) and fiddle; and Sage Reynolds on bass.