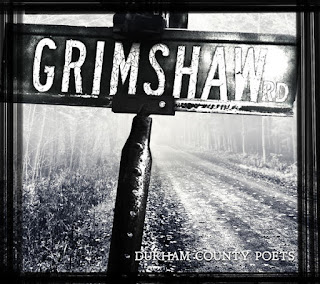 Ormstown, Quebec, a small town in the Chateauguay Valley about an hour or so southwest of Montreal, has a music scene that is seemingly out of proportion to its size and the finest band to come out of that scene is the Durham County Poets, a five-piece unit whose mostly original repertoire encompasses such styles as folk, blues, rock, swing and gospel – often mixed and matched within the same song.

I quite liked the Poets’ first two albums. Both Where the River Flows, released in 2012, and Chikkaboodah Stew, from 2014, were full of good songs and fine performances. But, their brand new release, Grimshaw Road, is their best yet. With more than five years of performing together, they’ve really gelled as a band and their songwriting – each of them contributes or collaborates – is stronger than ever.

The band is fronted by lead singer Kevin Harvey, a naturally laid back vocalist who nails the essence of whatever song he’s singing, bringing it to life in a way that serves the music and, particularly, the lyrics. He’s well supported by guitarists David Whyte and Neil Elsmore, bassist Carl Rufh and drummer Jim Preimel. Several of the band members occasionally double on other instruments and there are some guest musicians on some tracks including producer John McColgan on percussion and veteran Montreal saxophonist Jody Golick.

The album opens with the band in blues mode on “Grimshaw Road,” in which the singer relates a late-night encounter with the devil. It sounds like it could be an encounter like Robert Johnson’s mythologized visit to the crossroads, but the narrator here hears the sound of a heavenly choir and is guided away by an angel.

A few of my favorite songs on the album include the contemplative “Streets and Sidewalks,” which is reminiscent of early James Taylor; the infectious “Monday Morning,” a swinging blues about a workingman starting his week; the jazzy “Bowl Full of Lazy,” which sounds like it could have come from one of Tom Waits’ early LPs; and “Outside Cat,” a jump blues that could be taken literally as a description of an actual cat prowling the neighborhood or metaphorically as a hipster description of someone living by his own rules.

In addition to the original material there are two songs not written by members of the Durham County Poets. Both are great performances and both feature guest vocalists in duet with Kevin. On a beautiful version of the late Penny Lang’s “Diamonds on the Water,” they are joined by Michael Jerome Browne (I presume this is one of the songs they’ll perform on June 15 at the Montreal Folk Fest on the Canal’s tribute concert to Penny) and their version of Blind Willie Johnson's “On Your Bond,” with Suzie Vinnick, comes from deep in the gospel well.

One minor complaint: The CD digipac and lyric booklet feature black-and-white photos – which I quite like – but the lettering for the credits and lyrics are in white and, unfortunately, white lettering on a black-and-white background is frequently difficult to read.

Among the stops on the Durham County Poets’ series of album-launching concerts is a show here in the Ottawa area on Friday, June 16, 8 pm, at the Black Sheep Inn in Wakefield.