Guy Clark – The Best of the Dualtone Years 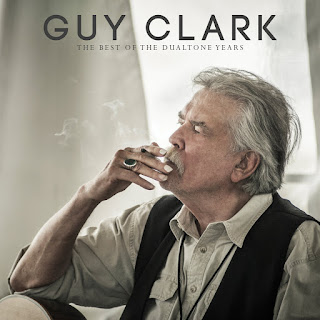 GUY CLARK
The Best of the Dualtone Years
Dualtone
guyclark.com

As I noted four years ago in my review of My Favorite Picture of You, “I started writing about music for the Montreal Gazette back in 1975 and one of the LPs I reviewed that year was Old No. 1, the first-ever album by Guy Clark, who was already a favorite songwriter of mine thanks to having heard some of his songs sung by Jerry Jeff Walker and Bill Staines. Since then, I’ve written about almost every album Guy has done over the years. I’ve also hung out with him a few times at folk festivals and interviewed him twice – once for the Gazette and once on the Folk Roots/Folk Branches radio program when he came up to Montreal to play a concert with Jesse Winchester at the Outremont Theatre in 2001.

Beginning in 2006, Guy’s final four albums were released by Dualtone Records and the 2-CD set, The Best of the Dualtone Years, is a lovely collection of 16 songs from those albums plus three previously unreleased demos.

As well as 10 then-new Guy Clark songs and a Townes Van Zandt cover from Workbench Songs, Somedays the Song Writes You and My Favorite Picture of You, there are also four of Guy’s classics from Songs and Stories, a live album he released in 2011, and, as mentioned, demo versions of three songs we’ve not heard before.

While I’m loath to pick favorites from this collection – this is a best-of collection from a songwriting giant – I will mention just a few.

One of the most affecting songs is “My Favorite Picture of You,” co-written with Gordy Sampson, a lovely remembrance of Guy’s late wife, the songwriter and painter Susanna Clark. In the song, Guy reflects on a photo of Susanna, describing her and her mood when it was taken, and turning it into a touching but powerful declaration of love.

Another affecting piece is “El Coyote,” co-written with Noel McKay, which describes impoverished Mexicans trying to find a better life in America only to be preyed on, exploited and deserted by human smugglers – surely a topical song in the age of Trump.

“The Guitar,” co-written with Verlon Thompson, Guy’s longtime performing partner, describes a supernatural encounter with an instrument of destiny in a pawnshop and is a definite highlight in the collection.

The live classics include the always-fun “Homegrown Tomatoes; “The Randall Knife,” a poignant memory of his late father; “Dublin Blues,” a meditation on beauty, great art and great music set to the old folk melody from “Handsome Molly”; and “The Cape,” co-written with Susanna, which he introduces as a song “about jumping off a garage,” but is really an affirmative piece about having confidence in one’s self.

The Best of the Dualtone Years is a fine introduction to Guy Clark’s later recordings but I would recommend all of his albums to anyone interested in great songwriting.