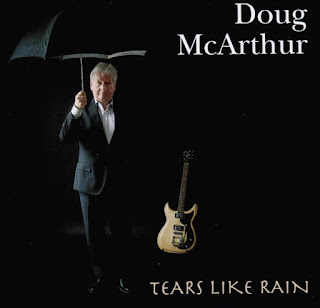 My direct involvement in the folk music scene started circa 1970 when I began volunteering at the Yellow Door, a Montreal coffee house that recently celebrated its 50th anniversary with a marvelous homecoming concert that I helped to MC.

Doug McArthur was one of the artists that I first encountered at the Yellow Door. He was playing there one weekend in the early-‘70s when a girl named Debbie brought her Sweet 16 birthday party to the Yellow Door. While Debbie may have wanted to hear folk music, most of her friends couldn’t have cared less; so it wasn’t the normally attentive audience we were used to in that little basement folk club. Doug, though, took it in stride, played the night and later parlayed the story of “Debbie’s Birthday Party” into a hilarious comedy routine.

“Tears Like Rain” was one of the songs I remember hearing Doug play at the Yellow Door in those days. It had opening lines, “Mr. Conductor, your train runs too slow, I paid for my ticket, I’m ready to go” and a chorus, “Oh Lord, tears like rain, Linda’s got the blues again,” that have stuck with me as an earworm for about 45 years. The earworm would always hit whenever I’d be on a train – particularly while the train sat in the station. For some reason, though, Doug never released the song on any of the albums he’s done over the years and I don’t recall hearing him do it live after the ‘70s.

Finally, though, the song has turned up as the title track of Tears Like Rain, a marvelous 10-song, 45-minute collection that includes several previously-released songs along with the newly-released material.

This version of “Tears Like Rain” has a swampier arrangement than I remember from the Yellow Door, but the almost-spoken lyrics remain compelling and it’s great to hear the full song again.

Among my other favorites on this CD is “Stumble From Vesuvio,” originally recorded on Angels of the Mission Trail, an elegant song-cycle Doug recorded with Jeffra that evokes earlier times in California. “Stumble From Vesuvio” imagines a literary café in San Francisco where time-out-of-place writers like Jack Kerouac, Robert Louis Stevenson and Jack London mingle.

Another old favorite is “Boots & Saddles” – this version rearranged and rerecorded – a song set at a roadside diner and gas station run by Betty and Joe. Bill Monroe stops there in 1949 and Elvis Presley eight years later. Betty and Joe wish they could leave with Bill or Elvis – but they can’t. In the final verse, Doug represents all the singer, songwriters and musicians who, years later, are inspired by the likes of those legends.

Among the other highlights are “The Morning I Left Galway,” a beautiful song about leaving that city in Ireland (it could be sung by an emigrant leaving home or even by a tourist captivated by the city and country) and “The Big Canoe,” a spoken-word piece set against atmospheric music that draws on folkloric legends (or perhaps imagined folkloric legends) inspired by the river that runs through Wakefield, Quebec, the village north of Ottawa where Doug lives, and the Algonquin indigenous people who traditionally lived in the area.