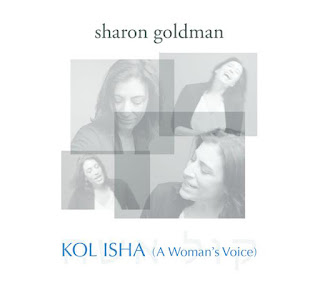 (A version of this review was published in the April 3, 2017 issue of the Ottawa Jewish Bulletin.)

Sharon Goldman, a New Jersey-based singer-songwriter, who was raised in an Orthodox Jewish home, has created in Kol Isha (A Woman’s Voice), a remarkable song-cycle in which she writes eloquently and sings beautifully, from a liberal and feminist perspective, about being a questioning Jewish woman.

Sharon’s role as a questioning is established in “The Tribe,” the album’s opening song, in which she explains who she is, the traditions she was born to and feels bound to, and the lines and limits “I knew which I could not cross/For the survival of a people,” until she meets the man who would become her second husband – and asks, “Could I meet him as a woman/Not as a member of the tribe?”

Later, in “Kol Isha (A Woman’s Voice),” the album’s title song, she reveals that her questioning began to formulate as a 12-year-old girl, seated silently in the women’s section in her synagogue, because only men’s voices were allowed to be heard there. As someone who wanted to sing, and who knew the melodies, she longed, in vain, to lift her voice during the service.

One of the most telling songs is “The Sabbath Queen” in which the perfect image of the Sabbath queen hides the reality of the hard life experienced by an Orthodox Jewish wife and mother in a rigidly traditional household.

Sharon draws on biblical imagery in a couple of songs, most notably “Pillar of Salt,” which is based on the story of Lot’s wife. Sharon notes, with more than a hint of resignation, that Lot’s wife was “a nameless wife and mother” in the Bible legend, “that no one hears her voice.”

And in two songs, “Jerusalem (Yerushalayim)” and “Land of Milk and Honey,” Sharon sings of her complicated relationship with Israel – a loving relationship rooted in ideals but tarnished by contemporary realities.

Sharon’s songs – with their lovely melodies – are arranged in traditional folk styles. A couple of songs have a distinctly Middle Eastern feel in the arrangements thanks to oud player Brian Punka and percussionist Cheryl Prashker.

Kol Isha (A Woman’s Voice) is a very special collection.