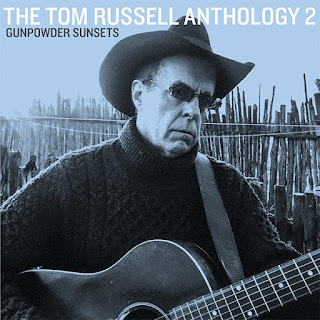 The first time I wrote about Tom Russell was in a review of his 1987 LP, The Road to Bayamon. I think I’ve written about every album he’s released since. At some point along the way I referred to Tom as the best singer-songwriter of my generation – the generation that came along 10 or 15 years after Dylan. It was a claim I repeated in 2008 when I wrote the long essay that accompanied Tom’s 2-CD career retrospective, The Tom Russell Anthology: Veteran’s Day and it is a claim that still resonates with me eight years later with the release of The Tom Russell Anthology 2: Gunpowder Sunsets.

This second volume of the Anthology is a generous 19-song, 79-minute set that includes several early songs, several previously-unreleased tracks, and many that were first released in the years since that first volume. The collection is a great introduction to Tom Russell neophytes and it has enough previously-unheard material – and a fresh-sounding sequencing – that makes it a great listen for longtime aficionados like me.

The set kicks off with an undated demo version of “Honkytonk Heart (Like Mine),” an infectious rockabilly tune that sounds like it could have been a hit for Elvis or Jerry Lee back in their Sun Records day. Then we hear a couple of great songs from the ‘80s: an alternate take of “Spanish Burgundy” from the Poor Man’s Dream sessions and a terrific live version from Lost Angels of Lyon of “The Road to Bayamon,” Tom’s vivid description of life in a traveling Puerto Rican carnival.

As I noted in my essay for the first volume of the Anthology, “I’m convinced that Tom’s folk-opera, The Man from God Knows Where, a song-cycle that documents the immigrant experience in America, is the most important folk recording by anyone in the past 25 or more years,” and the track from The Man from God included on the second volume is “Love Abides,” a duet with Iris DeMent, that was the finale to the folk-opera. Set along the borderlands of the United States and Mexico, it’s a beautiful song that contrasts tragedy with blessings, hope and love.

“When Sinatra Played Juarez,” from Borderland, featuring the masterful Tex-Mex accordion playing of Joel Guzman harkens back to decades ago when the Mexican city across the river from El Paso was a mecca for its nightlife and not a drug cartel warzone while in the rocking “Tijuana Bible” from Modern Art he tells the true life tale of a famous Hollywood murder case.

Three tracks follow with backing from Calexico from the 2009 album, Blood and Candle Smoke. On “East of Woodstock, West of Vietnam,” Tom recalls 1969 when – as the war in Vietnam raged, Neil Armstrong took his small step onto the moon, and 500,000 people sat in the Catskills mud for a three-day music festival – he went to Nigeria as a young academic to teach. The song “Nina Simone” references the great blues-jazz-folk singer but it’s not about Nina Simone per se. It’s about finding what you need in a voice that understands. Maybe for Tom in a bar in San Cristóbal, it was the voice of Nina Simone on the juke box. I know I’ve heard Nina Simone cut through to my soul when she sings about being “lost in the rain in Juarez” in a way I think Dylan would appreciate. Sometimes my “Nina Simones” have been Rosalie Sorrels or Billie Holiday or a dozen other singers who understand. In “Don’t Look Down,” Tom uses a tightrope walker’s advice as a starting point to reflect on past history, the meaning of life and love, and the future.

Then we hear a couple of tracks from the 2011 album, Mesabi. The title song, which begins with about 10 seconds of solo acoustic guitar picking out the melody line to “Don’t Think Twice, It’s All Right,” is named for the Mesabi Iron Range in Minnesota, the area where Bob Dylan grew up in the 1940s and ‘50s. The song begins with a description of the kid that was the young Robert Zimmerman in Hibbing and then shifts into the 1960s and the kid who was the young Tom Russell listening to and being inspired by the troubadour kid singing “Don’t Think Twice” on his uncle’s record player. “Sterling Hayden” is a tribute, of sorts, to the tough guy actor, author and raconteur who mostly lived life on his own terms, famously expressing one major regret: naming names before the House Un-American Activities Committee during the McCarthy era. “I don't think you have the foggiest notion of the contempt I have had for myself since the day I did that thing,” Sterling Hayden wrote years later. Tom brings a variation of that quote into the song, which he sings as both a third-person narrator and as Hayden himself. Tom’s song refers to seeing Hayden interviewed on the Johnny Carson show. I can also vividly remember a series of fascinating interviews he did in the ‘70s with Tom Snyder on the Tomorrow show.

Two songs are from Aztec Jazz – Tom’s sublime live album with a chamber orchestra, the Norwegian Wind Ensemble – both of them originally released on Blood and Candle Smoke. “Guadalupe,” done beautifully with some gorgeous guitar lines by Thad Beckman and an orchestral arrangement highlighting the oboes, is a song that reveals more every time I hear it. And I’m not necessarily referring to new layers of understanding of what Tom was thinking when he wrote it. I mean what I hear and understand about my own truths and my own quests filtered through Tom’s words and the gorgeous melody. “Finding You” is a beautiful love song written for Nadine Russell, Tom’s wife, and is lushly arranged for the orchestra.

Four songs follow from 2015’s The Rose of Roscrae: A Ballad of the West, the third in Tom’s series of extraordinary concept albums (following The Man from God Knows Where and Hotwalker). In the Irish-influenced “The Rose of Roscrae,” the protagonist, Johnny Dutton, recalls leaving Ireland for America in the 19th century after a conflict with his lover’s father make it impossible for them to stay while in the folk-rocking “Hair Trigger Heart,” he reflects on his life as an outlaw in the (brief) time and place that was the old west. “He Wasn’t a Bad Kid When He was Sober,” deconstructs the myth of Billy the Kid and “Resurrection Mountain,” with vocal harmonies by the McCrary Sisters, is a gospel song that reflects on matters of life and faith.

The CD ends with two more songs I’d never heard before. The undated “Iron Eyes Cody” reflects on the life of an actor who played Indian roles in hundreds of western movies and TV shows – and was, perhaps, most memorably, the crying Native American in the anti-littering public service TV spot in the 1970s. Iron Eyes Cody, who died in 1999 at age 94, always claimed to be Native American but turned out to have been the son of Italian immigrants to the United States. Then Tom ends the set with “Where Do All the Cowboys Go?” a beautiful and fitting finale, sung as a duet with Eliza Gilkyson. The song was written for The Rose of Roscrae but not ultimately used on that project.

These songs on The Tom Russell Anthology 2: Gunpowder Sunsets leaves me in anticipation of whatever might be coming next from the best songwriter of my generation.

Note: Comments on some of the songs in this review have been taken from reviews I’ve written about the albums from which they originated.