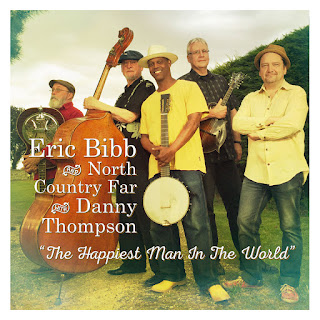 Just six months after the release of Lead Belly’s Gold, Eric Bibb’s brilliant tribute to the seminal folk and blues artist Lead Belly, Eric returns with The Happiest Man in the World, a set of mostly original, but firmly in-the-tradition songs.

As I’ve noted before, Eric has been an extremely prolific artist over the past couple of decades but he keeps things fresh, from one album to the next, both by consistently writing and choosing great material and by varying his use of collaborative musicians. On this set he’s working with North Country Far – a trio of Finnish musicians including Olli Haavisto on Dobro, pedal steel and Hawaiian guitar; Janne Haavisto on drums and percussion; and Petri Hakala on mandolin, mandola, fiddle and guitar – and legendary British bassist Danny Thompson who provide always tasteful and never obtrusive back-up for Eric’s own inspired singing and guitar and banjo playing.

Eric sets the tone for the album with the upbeat title track, a declaration of love that makes him the happiest man in the world. The theme continues on a number of other songs including “Toolin’ Down the Road,” which celebrates sitting in the passenger seat while the woman he loves is at the wheel; “I’ll Farm for You,” which uses metaphors of farm life to proclaim love; “Born to Be Your Man,” which uses a litany of famous names – some of them real people, some of them biblical and folkloric figures, even cartoon characters – to provide points of comparison for his love; and “King Size Bed,” featuring Petri’s dancing mandolin playing.

Among my favorite tracks on The Happiest Man in the World are “Tossin’ an’ Turnin’,” a blues to complement Woody Guthrie’s Dust Bowl Ballads; the soulful “Creole Café,” sung from the perspective of a blues-singing husband deeply in love with his wife who runs a small café out in the country; and a lovely version of the traditional “Tell Ol’ Bill,” which Eric has recorded a couple of times before, and which always reminds me of my late friend Dave Van Ronk.

There are cameo appearances by several other musicians and singers on a few songs including the album’s finale, a bluesy version of the Kinks’ “You Really Got Me,” which features Montreal’s own Michael Jerome Browne, who has frequently toured with Eric, on slide and 12-string guitars.

Despite the fact that Eric has recorded so many albums in recent years, each of his recordings is a treat and The Happiest Man in the World is no exception.