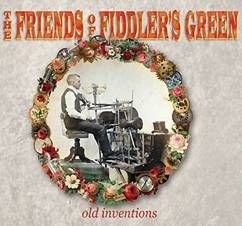 Back in the 1970s, my occasional trips to Toronto would often include a night spent at Fiddler’s Green, a British-style folk club in a building behind the YMCA on – if I recall correctly – Eglinton Avenue. There would usually be a featured performer for the evening and a bunch of other folks doing short sets – among them, usually, at least some of the members of the Friends of Fiddler’s Green, a group of singers and musicians made up of the club’s directors and some of their friends.

While the Fiddler’s Green folk club folded decades ago – sometime in the ‘80s, I think – the Friends of Fiddler’s Green have endured and are still going strong 44 years after first coming together back in 1971.

Why their longevity? My guess is that it’s because the Friends of Fiddler’s Greem has never been a professional band in the sense that it provided the livelihood of the members. They were and remain amateurs in the best (and most professional) sense of the word. They’ve continued to come together over the years for the sheer joy of singing and playing music together.

They’ve also survived personnel changes as a few have left the group over the years and others have joined. Sadly, a couple of the Friends – David Parry and Tam Kearney – have passed away.

The Friends have not been prolific recording artists. Their first album, This Side of the Ocean, was released as an LP in 1981 (and reissued on CD in 1997 augmented with an extra half-hour of concert recordings from back in the day). Their second, The Road to Mandalay, came out in 1994.

More than 20 years later, Old Inventions is their third album as a group and it finds them in fine form running through a repertoire of folk, music hall and contemporary songs and tunes.

The current Friends – most of whom have played on all three albums – include Ian Bell, the newest member, on banjo, guitar, concertina, pipes, trombone and bass; Alistair Brown on concertina, button accordion and harmonica; Grit Laskin on guitar, mandolin and bones; Jeff McClintock on piano; Ian Robb on several kinds of concertinas; and Laurence Stevenson on fiddle. Most also sing lead vocals occasionally and all sing harmonies and choruses.

The album begins with a couple of songs that are quite typical of a Friends of Fiddler’s Green performance. Alistair takes the lead vocal on “Twelve and Tanner a Bottle,” Will Fyfe’s humorous 1920 complaint about the rising price of whiskey before Ian Robb leads the group on a slightly less familiar version of the familiar traditional folksong “All Around My Hat.”

With nary a weak track among the 14 songs and instrumental medleys, a couple of my other favorites include a banjo-driven version of the chantey “Roll the Woodpile Down,” featuring a lead vocal by Ian Bell; the ensemble version of the celebratory pub song “Doon In the Wee Room,” sung as a tribute to Tam Kearney who passed away in 2013.

Two exceptional original songs speak to types of inspiration. Grit’s “If You Want to Change the World,” is about the dedication and perseverance required to make social progress and effect change while Ian Robb’s “The Reason Why,” is about the right and wrong reasons for singing and making music. 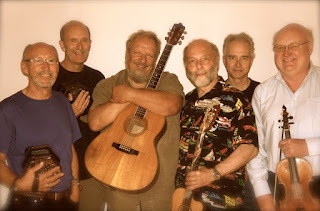 My very favorite song, though, is the poignantly beautiful version of John Lennon and Paul McCartney’s “In My Life,” sung by Grit as a memorial for friends who have passed on. In the liner notes, Grit talks about our mutual friend, the late Rick Fielding, and I’ve no doubt he was also thinking of David and Tam as he sang the song.

The Friends of Fiddler’s Green will be performing several concerts in Ontario to celebrate the release of Old Inventions.

Posted by Mike Regenstreif at 11:58 PM