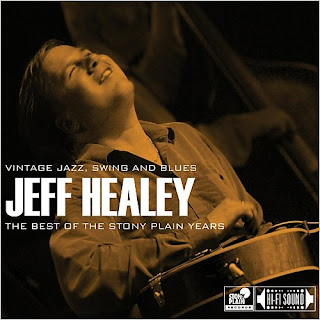 As I noted five years ago in my review of Jeff Healey’s Last Call, “The late Jeff Healey (1966-2008) was – with great reason – one of Canada’s most popular blues-rock guitarists and an exciting bandleader. He was also an expert on the hot jazz and swing of the 1920s, ‘30s and ‘40s – I remember some great radio shows he hosted on the CBC playing old 78s – and, in the last decade or so before cancer took his life, went public as a traditional jazz singer, trumpet player and guitarist, touring and recording a series of fine albums with the Jazz Wizards, a group distinct from his blues-rock band. As much as I enjoyed hearing Jeff play blues-rock, I much preferred hearing him in the jazz context.”

I’ve got Healey’s jazz albums (and the Stony Plain sampler) on my shelves so there was nothing new for me on this CD. Still, it’s a terrific reminder of the real joy Healey had playing the music he loved.

Among my favorites – I do really like the whole CD – are “The Wild Cat,” an instrumental featuring Healey on guitar and Drew Jurecka on violin sounding like Django Reinhardt and Stephane Grappelli in their prime (with modern day sound quality); “Sing You Sinners,” a swinging gospel spoof recorded live at Hugh’s Room in Toronto with British trombone legend Chris Barber sitting in with the Jazz Wizards; a version of Hoagy Carmichael’s “Hong Kong Blues,” that’s all Jeff on vocals and two guitars; and the rousing finale of “Sweet Georgia Brown,” another tune with Barber from the same Hugh’s Room show as “Sing You Sinners.”

This collection clocks in at 53 minutes but leaves me wanting more. I think I’ll go pull out the original albums.