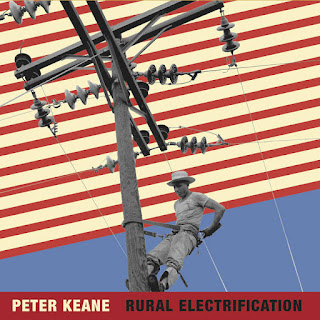 I was a big fan of Peter Keane’s four earlier albums and their subtle mixtures of in-the-tradition originals and interpretations of country blues and folk classics. After about 13 years since his last album, Peter has resurfaced with Rural Electrification, an album that is both a continuation of what he’s done on earlier albums, and a departure.

The album continues where Peter left off as he remains a wonderfully subtle song interpreter. Most of these songs date from the 1920s and ‘30s and he gets to the essence of each song with his superb fingerpicking and easy going singing. Everything you could want in the guitar arrangement – and it’s a solo album, just Peter’s guitar and vocals – is there, and there are no unnecessary vocal gymnastics to distract from the lyrics.

The departure is that Peter played acoustic guitars on his earlier albums and – as hinted at in the album title, Rural Electrification – he’s playing an electric guitar, a rich-sounding Gretsch hollow-body, on this one. Happily, the switch to electric guitar doesn’t mean he’s cranking the volume to 11, adding feedback or weird effects, or rocking out. Mostly, the difference is in a bigger range of tone and some added sustain and reverb. The sound remains as purely musical as on the acoustic guitar. I wouldn’t say I like it more or less than Peter’s acoustic work, it’s just a little different.

Among my favorite tracks are Mississippi John Hurt’s “Nobody’s Dirty Business,” Elizabeth Cotten’s “When I Get Home,” the Mississippi Sheiks’ “Sitting on Top of the World,” Goebel Reeves’ “Hobo’s Lullaby” (which is often cited as Woody Guthrie’s favorite song), and his own “Almost Gone,” the only new song in the 12-song set.

Whether Peter sticks with the electric guitar or goes back to acoustic, or uses both, I do hope it will be much sooner than 13 years when we hear from him again.