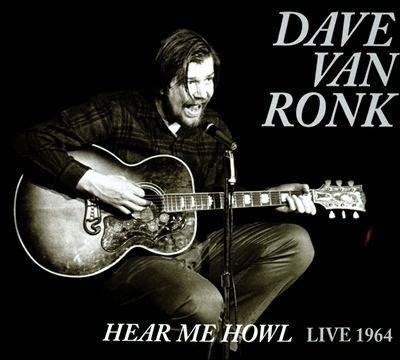 
As I’ve noted before, the late, great Dave Van Ronk (1936-2002) was one of my teachers. I never took a guitar lesson from him but I learned a lot from him about the history of music – about Bessie Smith, Jelly Roll Morton, Furry Lewis, Mississippi John Hurt, Bertolt Brecht and many other seminal figures, and about a Greenwich Village scene that was happening about a dozen years or so before I first got there.

I first met Dave sometime around 1970 when he played at the short-lived Back Door Coffee House in Montreal. He was more than gracious in chatting with the teenaged me and in answering any and all the questions that this fascinated kid could throw at him. He also pointed me in some interesting directions in music to listen to.

A few years later, an actual friendship developed when we’d meet regularly at folk festivals, on trips that I took to New York City in the mid-‘70s to early-‘80s, and on his trips to Montreal to play at the Golem, the Montreal folk club I ran in the ‘70s and ‘80s.

I spent a few late nights sitting on Dave’s couch in New York, and a few more when he sat on my couch in Montreal, as we listened to music, talked about music and occasionally argued about politics.

More than the history of music, Dave taught me how to listen to music – I mean really listen to music. How to give the music I was listening to the attention it deserved. I remember one night in the 1980s when he was staying with me during a visit to Montreal to play at the Golem, he had me listen to a Lester Young saxophone solo on an LP that I had over and over again until I fully understood and appreciated some point Dave wanted me to understand about the solo.

Hear Me Howl, Live 1964 was recorded in concert at Indiana State University in Bloomington about six years before the first time I heard Dave live. By then, though, Dave was already hugely influential and a Greenwich Village legend known as “The Mayor of MacDougal Street.” As Bob Dylan wrote in his memoir, Chronicles: Volume One, about his own early days in the Village a couple of years earlier, “Van Ronk could howl and whisper, turn blues into ballads and ballads into blues. I loved his style. He was what the city was all about. In Greenwich Village, Van Ronk was king of the street, he reigned supreme.” Although I’ve listened to all of Dave’s albums from those days countless times, and have Dave’s studio (and live) versions of almost all of these songs  – in fact, multiple versions of some of them – it’s still a treat to hear this never-before-released concert recording.

The 2-CD set includes such signature songs as “Green, Green Rocky Road,” “Cocaine Blues,” “He was Friend of Mine,” “Candy Man” and “St. James Infirmary” – numbers that I think Dave included in almost every concert I ever saw him do (and there were many in the 1970s, ‘80s and ‘90s).

The set also shows just how varied Dave’s repertoire already was by 1964. Along with the expected doses of blues – Dave was one of the earliest and always one of the best of the blues revivalists – there are masterful performances of Bertolt Brecht and Kurt Weill’s “Alabama Song”; a setting of William Butler Yeats’ “Song of the Wandering Aengus” learned from Judy Collins; “St. Louis Tickle,” a ragtime piece adapted by Dave for the guitar; and Billie Holiday’s classic “God Bless the Child.”

Some other favorites on Hear Me Howl include Jelly Roll Morton’s “Buddy Bolden’s Blues” (that I have a decent collection of Morton’s recordings on my shelves is because of Dave), two songs – “You’ve Been a Good Old Wagon” and “Nobody Knows You When You’re Down and Out” – learned from Bessie Smith recordings, the traditional folksong “Tell Old Bill,” and “One Meatball,” picked up from Josh White.

In addition to the 1964 concert recording, the second CD ends with a second previously-unreleased, and powerfully poignant version of “He was a Friend of Mine,” recorded in 1977 at the New York City memorial concert for Phil Ochs.

The CD package also includes an excellent essay about Dave and the recordings by the always erudite Mary Katherine Aldin who co-produced these 50-year-old recordings for release with James Austin.

Like many other Dave Van Ronk collections, Hear Me Howl is an album I know I’ll return to often in the years to come.