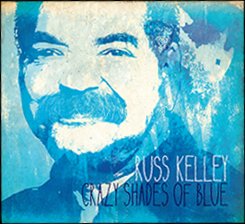 While Crazy Shades of Blue may be Russ Kelley’s debut CD as a singer-songwriter, he’s no newcomer. I knew Russ back in the early-1970s and used to listen to him a lot in the bars and coffee houses of Montreal. He’d been a member of Rings and Things, a Montreal folk group of the ‘60s that was just a little before my time, and was working a lot then in a duo with Sue Lothrop, who had also been part of Rings and Things. I remember Russ and Sue for their sweet harmonies and eclectic repertoire.

I lost contact with Russ for many years after he left Montreal and later learned from him that he’d moved to Nova Scotia and was performing there until he suffered a vocal cord injury in the late-1980s that led to surgery and the loss of part of his vocal range.

Russ quit performing after the vocal cord injury and became a cultural bureaucrat. When I reconnected with him about 10 years ago he was living in Ottawa as head of the music section of the Canada Council. He retired from the Canada Council in 2011 and, happily, got serious again about songwriting and performing.

Of course, Russ’ voice is now rougher than I remember from back in the day – it’s a ragged but right kind of voice well-suited suited to the conversational kind of delivery he’s adopted and Russ knows how to use it to communicate the words and emotions behind the songs.

Crazy Shades of Blue is a varied album of mature songs that draw on contemporary folk, blues and jazz influences. One song, “Elaine,” is from back in the days when I used to see Russ play in Montreal, with the rest, I believe, being of recent vintage.

Among my favourite tracks on the album are the folkier songs like “Sometimes It’s So Simple,” which kicks off the CD, “Somewhere Later Down the Road,” which features some nice slide guitar work by Doug Cox, and “In the Middle of the Day,” inspired by a story Russ heard told by comedian Margaret Cho.

Others highlights include the jazzy title track which features Jane Bunnett’s saxophone moving nicely in and around Russ’ singing, and “I Disappear,” an exploration of personal identity after the dissolution of a marriage.