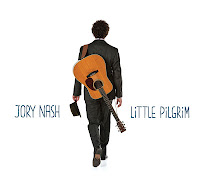 Little Pilgrim is Jory Nash’s seventh album since his 1998 debut. As I noted in a 2007 review of his Folk Jazz Blues & Soul in Sing Out! magazine, I’ve enjoyed watching – and particularly listening – as the Toronto-based singer-songwriter has matured into an artist of substance.

Jory had come a long way as a singer-songwriter when I made that observation almost six years ago and he’s come further since. Little Pilgrim is an elegant collection of well-crafted songs – many of which recall the early-1970s when artists like James Taylor, Paul Simon and so many others blended folk and pop music influences to create songs that were at once both personal and universal and which reached beyond the insipidness typical of most popular music.

Among my favourite songs on Little Pilgrim are “The Long Siesta,” in which Jory’s narrator, a criminal who’s been lying low among the tourists in the sun, plots his return to action; “Truth,” a sweet, jazzy piano-based late-night reflection influenced – as Jory acknowledges – by early Tom Waits and Billy Joel; and “Take Me Back to Monticello,” inspired by a childhood trip taken with his family.

Also among the most impressive songs are “Little Pilgrim,” in which the character finds some kind of redemption in a religious experience; “Sally,” a plea for forgiveness inspired by a night of Randy Newman songs; and “Helicopters Circling,” an angry commentary about what happened to civil liberties in Toronto in 2010 when the G20 Summit came to town.

Each song is meticulously and individually arranged with outstanding work by Jory and a group of studio musicians and harmony singers including Jason Fowler, David Matheson, Christine Bougie, co-producer Chris Stringer, Lori Cullen and Suzie Vinnick.