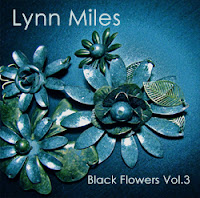 As I noted in my review of Black Flowers Volume 1-2, Lynn Miles has long been one of my favourite confessional singer-songwriters and although I’ve always enjoyed and appreciated her studio recordings – indeed, some of them are favourite albums – I’ve always preferred hearing her perform live in stripped-down settings which allow her beautiful voice and her excellent songwriting to shine.

A few years ago, Lynn began a long-term project to record solo acoustic versions of her entire song catalogue – both songs that have been released on her studio albums and previously unrecorded songs. Black Flowers Vol. 3 is the third CD in the series and – by my count – includes six songs drawn from her earlier studio albums and four which appear on CD for the first time.

As on the first two volumes in the Black Flowers series, without other musicians, all attention is focused directly on Lynn’s voice accompanied only by her own piano, guitar or guitar-harmonica playing, and her excellent songwriting. I hear the previously recorded songs on a deeper level than before and the previously unreleased songs – some of which I’m sure I’ve heard her do live at some point – are similarly heard.

While all of these are great songs, my favourite tracks include “Hockey Night in Canada,” the standout song for me on Lynn’s first CD, a vivid portrait of Montreal – or almost any Canadian city for that matter – deep in the cold winter when all we can do is long for a beautiful summer day; “Drunks and Fools,” which captures the feelings and state of mind most of us have felt and had at least one time or another; and “Look Up,” a reminder that a broken heart is not the end of the world, that life goes on. It’s a perfect finale to set in which many of the songs beautifully capture feelings of regrets and broken hearts.