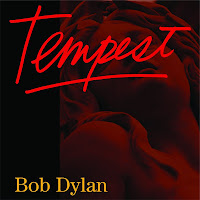 Tempest, released 50 years after Bob Dylan’s self-titled debut, is the work of a master songwriter -- the master songwriter of our time – informed by half a century of his own work and by the music of what Greil Marcus called “old weird America,” the folk music and folk-rooted blues and country music which developed in various regions before spreading everywhere in the 20th century via recordings and migratory performers. Some of these songs tell stories as detailed narratives, others paint pictures of scenes, both connected and disjointed. Many are filled with scenes of violence and death, with love, hate, sex and sexism, and religion. It’s impossible to know, in most of them, if Dylan is singing from his own heart or from the heart of his characters – or some combination of both.

The album opens with “Duquesne Whistle,” a train song that swings a little like an old Bob Wills tune, but which really reminds me of the Memphis Jug Band’s “K.C. Moan,” which was included on the Anthology of American Folk Music (Smithsonian Folkways), the monumental collection of songs from “old weird America” assembled in 1952 by Harry Smith (and which Dylan undoubtedly heard sung back in the day by our mutual friend, Dave Van Ronk). There’s no real narrative to the song, which was co-written with Grateful Dead lyricist Robert Hunter (the album’s only writing collaboration), but in each verse the train whistle recalls another scene: a traveler on the train, of a love relationship, childhood, etc.

“Soon After Midnight,” in folk-like ballad form seems to be a late-night confessional that could be, at least at first, either religious or romantic in nature. As the song develops, Dylan refers to harlots and “Two-Timing Slim,” whose corpse he’ll “drag through the mud.” Is it a song of regret about betrayal of a lover or wife or of God? The lyrics, like so much of Dylan’s work are open to interpretation.

There’s a lot going on in “Narrow Way,” – religion, history, war, love, sex – which all unfold in a series of images set to an intense, Chicago blues arrangement.

“Long and Wasted Years,” is seemingly written as an apology to a lover or former lover or judging from the line, “It's been a while, since we walked down that long, long aisle,” a wife or former wife. I don’t know – and we probably can’t know – whether Dylan is singing about a relationship from his own life or in character. However, the line, “I wear dark glasses to cover my eyes, there are secrets in ‘em that I can't disguise,” strikes me as perhaps as one of Dylan’s most revealing lines about himself in decades.

The images in “Pay In Blood,” like many of these songs are vague and seem to suggest different things at different points in the song. Sometimes they seem to be coming from a religious zealot, sometimes from a political skeptic. The tone is angry and accusatory but it’s hard to tell if they’re coming from above or below, let alone left or right.

I’ve seen commentaries on “Early Roman Kings,” which uses Muddy Waters’ “Mannish Boy” as its template, which interpret the song to be about a New York City street gang out for blood and money. Maybe, but my read is that it’s about unbridled capitalists who will destroy the soul of society in their quest for figurative blood and real money. Of course, as with so much of Dylan's work, the interpretation is in the ear of the beholder.

“Tin Angel,” which also touches on the greed and the need for control of an unbridled capitalist type lifts lines and some of its story from “Gypsy Davy,” Woody Guthrie’s rewrite of the traditional “Gypsy Davy,” “Gypsy Daisy” or “Gypsy Laddie” ballad. Dylan’s contemporary folk-styled ballad is a richly detailed story of love, jealousy and betrayal that ends tragically with all three characters dead in a tale of murder and suicide.

“Tempest,” the title track is another long, richly detailed folk-like ballad that tells the story of the sinking of the Titanic, 100 years ago, that mixes fact with images and details from Dylan’s imagination – the references to a character in the song named Leo were supposedly inspired by actor Leonardo DiCaprio who starred in the Hollywood film version of the story. Through 14 riveting minutes – I believe it’s Dylan’s longest song ever* – and 45 verses without a chorus, the story unfolds with seemingly as much detail as the film (minus Leo's love story with Kate Winslet's character). There’s so much going on that you really need to hear it repeatedly to let the details sink in. (*Update September 26: “Tempest” is actually about 2.5 minutes shorter than “Highlands” from Time Out of Mind. Thank you to John Yuelkenbeck for reminding me of that.)

“Roll On John,” which ends the album is a tribute to the late John Lennon filled with details from Lennon’s life and lines from several of his songs. As a song title, it completes a 50 year circle for Dylan who sang a great version of the traditional song, “Roll On John,” on a 1962 radio program in New York City. You can hear that radio recording on the compilation There Is No Eye: Music for Photographs (Smithsonian Folkways), an album put together by John Cohen of the New Lost City Ramblers of songs by artists he photographed back in the day.

Listening to Tempest, I can’t help but be reminded of Bob Dylan at 70, an essay I wrote 16 months ago on the occasion of his milestone birthday. Almost everything about Tempest reinforces what I wrote in that essay – from the roots of his songwriting, to his gravitas, to our inability to know him.