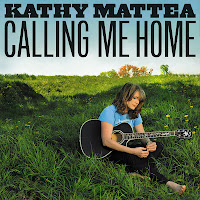 In a career dating back to the 1980s, Kathy Mattea had a bunch of country hits. In 2008, though, she shucked all commercial pretence and released Coal, a thematic folk and bluegrass album of songs about the lives of Appalachian coal miners. It was her finest work ever. Whether singing about lost ways of life or of lost lives, she found the emotional essence of each song and brought it, sometimes powerfully, sometimes beautifully, to the fore.

Although only a few of the songs on Calling Me Home explicitly deal with coal miners, the album, both thematically and musically, does continue in the vein of Coal and at least equals, if not surpasses, the predecessor’s achievement.

The deep Appalachian roots of the album are signaled from the beginning of the first song, Michael and Janet Dowling’s “A Far Cry,” when the first sound heard is the fiddle and the second is the mandolin. The song itself, memorably recorded years ago by Del McCoury, is a powerful song of regret from the perspective of someone who forsook their life in the Appalachians, and the love they had there.

As noted, several songs deal directly with coal mining issues. Jean Ritchie’s quietly powerful “West Virginia Mine Disaster,” sung from the perspective of a woman whose husband was one of many men lost in the latest mining disaster and who fears a similar fate could await her sons. “Black Waters,” also written by Jean, and equally quietly powerful, is a lament for the environmental devastation the coal industry has wreaked in states like Kentucky, where Jean comes from, and West Virginia, where Kathy comes from. In Larry Cordle’s “Hello, My Name is Coal,” the narrator is coal itself contrasting its virtues and its sins.

Most of the other songs are drawn from writers who are either from the Appalachians like the late Hazel Dickens, or who have immersed themselves in the traditional culture and/or music. Among the most compelling are Si Kahn’s “Gone, Gonna Rise Again,” in which a beloved and wise grandfather is recalled; and Alice Gerrard’s “Calling Me Home,” sung a cappella with chilling harmonies by Tim Eriksen, in which a dying man says his farewells.