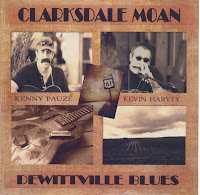 CLARKSDALE MOAN
Dewittville Blues
Clarksdale Moan
reverbnation.com/clarksdalemoan
One of the things I’ve always liked about going to folk festivals is discovering new – or, at least, new to me – artists that I want to hear more of. Clarksdale Moan, an acoustic blues duo from the Chateauguay Valley area south of Montreal was just such a discovery at the Ottawa Folk Festival in 2010.
Clarksdale Moan is singer and harmonica player Kevin Harvey and guitarist Kenny Pauzé. Their band name is a song title by Son House that refers to the Delta town in Mississippi, about 75 miles south of Memphis, which is so steeped in blues history. The crossroads where legend has it Robert Johnson sold his soul to the devil is just outside of Clarksdale.
Appropriately enough, the album leads off with a Robert Johnson classic, “When You Got a Good Friend.” On this track, and most of the rest, Kevin and Kenny showcase their basic sound: Kevin’s relaxed vocals and harmonica fills and Kenny’s full-sounding acoustic guitar arrangements – many played slide style. Most of the songs are either traditional or drawn from familiar artists ranging from first generation blues masters like Johnson and House or more contemporary artists like Kim Wilson and Taj Mahal.
Among my favourite tracks are a sweet version of “Stack O’Lee” and an up tempo take on Muddy Waters’ “Can’t Be Satisfied” in which I don’t miss the fuller band sound I’m used to on that tune.
There are also a couple of Kevin and Kenny’s own songs, both of which use adapted blues melodies. “Someday,” is a positive, hopeful blues while “Dewittville Blues” – which I presume refers to the small village in the Chateauguay Valley near Ormstown, is cast in the familiar “Goin’ down to...” mode.
There are also three songs with an additional musician. Danny Bloom adds a second harmonica to two tracks and Terry Joe “Banjo” plays on one.
--Mike Regenstreif
Posted by Mike Regenstreif at 5:39 PM