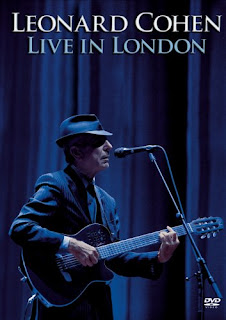 Leonard Cohen, the masterful Montreal-born singer-songwriter, will be performing two Ottawa concerts at the National Arts Centre May 25 and 26. Unless you’re willing to scalper prices, you can pretty much forget about getting tickets. They sold out, like everywhere else on Cohen’s world tour, almost instantly at up to $250 (plus service charges).

The concerts that Cohen will perform in Ottawa will vary little from the concerts that he’s given throughout his worldwide tour over the past year. The repertoire, down to each of the planned encores, has been essentially the same as Cohen moves from city to city and from concert halls here to arenas there. That doesn’t really matter though. From all reports, and from the evidence of his London, England concert last July 17, it’s an amazing, meticulously planned and executed show.

That London concert is now available in both DVD and 2-CD packages. The concert is mesmerising. When I sat down to watch the DVD, I did not get up again until I’d seen every minute of its two-and-a-half hours. I didn’t take the intermission that stretches a Cohen concert past three hours in person.

And what, you may ask, kept me glued to the set for 150 minutes? Let’s start with the songs. Cohen is one of the greatest songwriters of our age who is known for working endlessly on a song until every line, indeed every word, is perfect. Nothing in a Cohen song is wasted, even in an eight-minute song. And almost every songs clocks in at least five minutes. Only, “Suzanne,” an early masterpiece is within the typical length of most pop songs. Cohen is one of those very rare songwriters whose work continues to reveal nuance and deeper levels of understanding, even songs like “Suzanne,” or the biblically-inspired “Hallelujah,” or the classic “Bird on a Wire” which I’ve heard countless times over many decades.

Then there is Cohen himself. At 74, he is singing with such obvious commitment to both himself and his audience. And there seems to be some kind of wisdom-with-age dynamic that Cohen brings to the interpretation of each of these songs whether they were written recently, 20 years ago in middle age or 40 years ago as a relatively young man.

Finally, there is the quality of the nine world class musicians and singers who Cohen surrounds himself with on stage and uses to bring the great songs to life. The arrangements are highly creative. While I particularly appreciate the work of Javier Mas, a Spanish master of the guitar and a variety of exotic stringed instruments, and harmony vocalists Sharon Robinson, and sisters Charley and Hattie Webb, each of the other musicians is excellent.