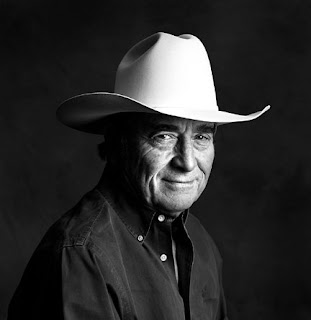 In my not so humble opinion, Ian Tyson has been one of the all-time great Canadian singer-songwriters since Ian and Sylvia burst on the scene in the early-1960s. I still love most of the Ian and Sylvia albums from back in the day as well as his solo work since the 1970s. I saw Ian in concert on Saturday for the first time since he started singing with what he calls his “new voice.” A couple of years ago a combination of vocal scarring and a bad virus took away the familiar smoothness and much of the range from the great tenor we’d known for 45 or so years. My last Ian Tyson concert was at Hugh’s Room in Toronto on November 27, 2006 before the change in his voice (and the night before Ian and I sat down for the long, career-spanning interview that ran on Folk Roots/Folk Branches on December 14, 2006).

Actually, I was surprised at how strong Ian’s singing seemed to be. While it was certainly not what it was back in 2006, Ian’s voice seemed to be considerably stronger than it was on Yellowhead to Yellowstone and other Love Stories, his album released late last year. Ian’s unique timbre and vocal inflections were there. There was no mistaking the singer and he still knows how to communicate the essence of a song to his audience.
.
There was also no mistaking the quality of his songs. Much of the set was devoted to sad songs of lost love and of the quickly disappearing west of the modern-day cowboys and included a lot of the material from Yellowhead to Yellowstone and other Love Stories and other relatively recent albums. He also occasionally reached back for a classic like “Navajo Rug,” co-written with Tom Russell, or way back to the Ian and Sylvia days for “Someday Soon” and “Four Strong Winds.”

After a well-deserved standing ovation, Ian encored with a poignant version of “Somewhere Over the Rainbow,” the only song of the night that he didn’t write or co-write.