Caroline Doctorow -- Another Country: The Songs of Richard and Mimi Fariña 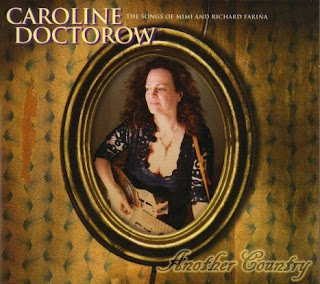 Mimi and Richard Fariña had a very brief career in the mid-1960s, releasing two fine albums – Celebrations for a Grey Day and Reflections in a Crystal Wind – in 1965 that still hold up remarkably well, before Richard was killed, at just 29, in a motorcycle accident on Mimi’s 21st birthday. A third album, Memories, included outtakes and a couple of solo tracks each by Mimi and her sister, Joan Baez, singing Richard’s songs, was released in 1968. The 12 songs and one brief instrumental on Caroline Doctorow’s tribute to the Fariñas were all drawn from those three albums.

Recording a successful tribute album like this means walking a tightrope in that the interpretations must retain the essence of the original versions while bringing something new to the songs. The arrangements have to simultaneously reflect the spirit of the times in which the songs come from while still sounding relevant today. Caroline Doctorow and her primary collaborator, producer Pete Kennedy, succeed admirably on this CD. Most of Caroline’s versions are every bit as good as the originals and there are even a couple, “Hard Lovin’ Loser” and “Sell-Out Agitation Waltz,” that I think are far better than the originals. Pete knows how to play and produce rock and roll much better than Richard did, so these rockier songs fare much better in his hands than they did in Richard’s.

Among my favourites on the CD is Caroline’s version of “Reflections in a Crystal Wind,” a lyrically oblique song that I’ve always heard as a young person trying to come to an understanding of what makes love, and the world, go round. Nanci Griffith supplies some lovely harmonies. Another is “The Quiet Joys of Brotherhood,” done here in a version that is both haunting and beautiful.

In addition to the Fariña songs, the album is built around Caroline’s excellent vocals and Pete’s excellent arrangements. Pete’s playing, on a variety of often-overdubbed instruments, is always superb. Other musicians and singers who contribute include Happy Traum, Eric Weissberg, John Sebastian, Nanci Griffith and Maura Kennedy.

I didn’t know Richard personally, but Mimi, who died of cancer in 2001, and I became friends in the 1980s and she made several trips to Montreal to play at the Golem, the folk club I ran back then. I think Mimi would have been very moved by Caroline’s tribute.