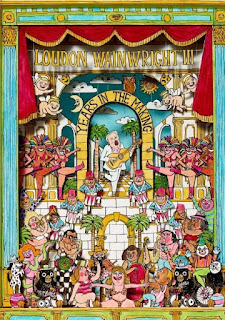 As I’ve noted before, I’ve known Loudon Wainwright III for a long time. I first met – and heard – him when he was married to my friend, the late Kate McGarrigle, in the early-to-mid-1970s. After the marriage broke up, I’d occasionally see him at folk festivals, at Kate’s when he’d come up to Montreal to see their children – Rufus Wainwright and Martha Wainwright – and booked him for a couple of concerts at the Golem when he’d come to town for those visits. In 2000, we sat down and did an extensive and very candid interview on the Folk Roots/Folk Branches radio show. Most recently, in 2015, we had a nice visit in Clearwater, Florida after a concert he did while Sylvie and I were on vacation there.

Years in the Making is “a comprehensive 2-CD audiobiography” of 45 years’ worth of outtakes, live recordings, radio performances and demos that comes beautifully packaged in a 64-page hardcover book featuring a lifetime’s memorabilia – from Loudon’s birth certificate to the cover page of his will. Among those making cameo appearances on some of the tracks are Kate, ex-partner Suzzy Roche, sister Sloan Wainwright, long-time collaborator Chaim Tannenbaum, Steve Goodman, and all four of his kids – Rufus, Martha, Lucy Wainwright Roche and Lexie Kelly Wainwright.

The songs are sequenced in seven thematic groupings beginning with “Folk.” This set includes some traditional songs, Woody Guthrie’s “Philadelphia Lawyer,” and “Love Gifts,” a Loudenesque parody of “I Gave My Love a Cherry.” My favorite tracks in this section are a sweet version of Bob Dylan’s “You Ain’t Going Nowhere,” recorded at home in 1974 with Kate on harmony vocals, and a duet with Chaim on “Roll in My Sweet Baby’s Arms” from 2008 that I presume is an outtake from High Wide & Handsome, Loudon’s terrific Charlie Poole tribute.

The second section is “Rocking Out,” with most of the tracks dating from the 1970s after Loudon had a commercial hit with “Dead Skunk” (which is not on this album) and he went on the road with rock bands. But the best track in this section is “Cardboard Boxes,” a 1993 live cut about moving with just Loudon on guitar and lead vocals, Chaim on banjo and harmony vocals and David Mansfield on mandolin.

“Kids,” the final section on the first CD begins with a 1986 home recording of “Birthday Poem/Happy Birthday/Animal Song” on which children Rufus, 13, Martha, 10, and Lucy, 4, wish their father a happy 40th birthday. Lexie, Loudon’s youngest child, appears later in this section in a 1999 home recording singing his “Ballad of Famous & Harper,” a precious song about a pair of pet cats. More serious fare includes a 2003 live version of “Your Mother & I,” a song from the ‘80s in which Loudon tries to explain her parents’ breakup to his young daughter (Lucy).

The second CD begins with “Love Hurts,” six songs about love and/or lost love. The finest entry in this section is “Rowena,” which he based on courting letters written by his grandfather to his grandmother in 1918.

A section called “Miscellany” is grab-bag of tracks highlighted by a beautiful version of “Down Where the Drunkards Roll,” one of Richard Thompson’s most stunning songs. Greg Leisz’s pedal steel work on this track is lonesome and lovely; and by “Meet the Wainwrights,” that features Loudon with Lucy, Suzzy, Martha, Rufus and Sloan singing about their relationships with him.

A short section called “Hollywood,” includes a snippet of an interview with Liza Minelli, in which she remembers “little Loudon, the kid next door,” her childhood neighbor, as well as “Hollywood Hopeful,” a 1975 song describing Loudon’s attempt to break in as an actor, and “Valley Morning,” a song he wrote from Judd Apatow’s film “Knocked Up.”

The final section, “The Big Picture,” kicks off with the hilarious “God’s Got a Shit List,” which you probably won’t be hearing in the radio anytime soon, and finishes with the equally hilarious and equally radio-inappropriate “Birthday Boy,” an a cappella song on which Loudon celebrates his birthday and himself.

Years in the Making might not be the best introduction for someone hearing Loudon for the first time. But it’s a terrific addition to his discography for those of us who have listened to and enjoyed his work over the past (almost) five decades (or parts thereof).