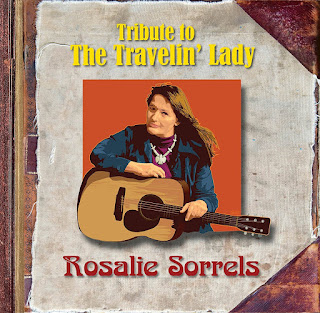 I was honored to enjoy a long friendship with the late and great folksinger and songwriter Rosalie Sorrels (1933-2017). I was still in high school, circa 1970, when I first encountered her at the Back Door, a Montreal coffeehouse that existed from 1969 to 1971. It was during that Back Door gig that Rosalie wrote “Travelin’ Lady,” her signature song.

By 1972, as a college student in Montreal, I began producing folk concerts in Montreal and my first concert with Rosalie was a double bill with Utah Phillips in 1973. There would be many more concerts with Rosalie in Montreal, and in the late-‘70s and early-‘80s, when I ran a small booking agency for a select roster of folk music artists, Rosalie was one of my clients.

As I noted in an essay in June when she passed away, “Rosalie taught me much about the endurance of the human spirit and that adversities and personal tragedies can be the basis for cathartic art. And she taught me how to recognize greatness in songs.”

And, as Eliza Gilkyson writes in the notes to her track on Tribute to the Travelin’ Lady Rosalie Sorrels, “Any folksinger of my generation must claim Rosalie Sorrels as a foundational influence.”

Tribute to the Travelin’ Lady Rosalie Sorrels is a 4-CD set encompassing 44 songs by almost as many artists. About half the songs are performed by artists I know – including several old friends – and about half are by artists from Rosalie’s home state of Idaho who fell under her spell. At least two years in the making, most of the songs were written by Rosalie. A few others were songs from her vast repertoire, two were written in tribute to her, and a couple are original songs by the late Guy Clark and the late Jimmy LaFave that I can easily imagine hearing Rosalie do.

The album begins with Tom Russell’s “Pork Roast and Poetry,” an original by Tom in which he describes an evening spent visiting with Rosalie at the cabin her father built in Idaho at Grimes Creek. Having spent more than a few evenings in decades long past visiting with Rosalie and sampling her cooking, I can attest to the absolute authenticity of the song.

There are so many great performances on these four CDs that I can barely begin calling attention to all of them. But some of the songs that touched me deepest include Robin and Linda Williams’ rendition of “Borderline Heart,” the title track of one of my favorites of Rosalie’s albums; Eliza Gilkyson’s interpretation of “Travelin’ Lady,” Rosalie signature song written the same week I first met her and the title track from two great albums; Terry Garthwaite’s version of “Apple of My Eye,” a poignant song written for Rosalie’s daughter Shelley (and hearing Terry sing it brought back fond memories of the concert I produced with Rosalie, Terry and Bobbie Louise Hawkins); Laurie Lewis’ version of “Last Go Round”; Peter Rowan’s version of “Go With Me,” a lovely song from If I Could Be the Rain, the first LP of Rosalie’s I ever heard in the late-‘60s; Barbara Higbie’s interpretation of “Hitchhiker in the Rain,” Rosalie’s heartbreaking remembrance of her late son David; John Gorka’s take on “Song for My Birthday,” a song about Rosalie independent spirit; and Jane Voss and Hoyle Osborne’s performance of “Delia Rose,” a song written for a young child.

And that’s just the tip of the proverbial iceberg. There are so many more great songs and wonderful performances – including some which take the songs in different directions from Rosalie’s original versions.

Kudos are particularly due to Idaho singer Rocci Johnson for spearheading this wonderful project (and for her rocking version of “Occasional Man”).

And the four CDs and booklet come in a beautifully designed boxed set inspired by Rosalie’s legendary scrapbook, and filled with photos from it.