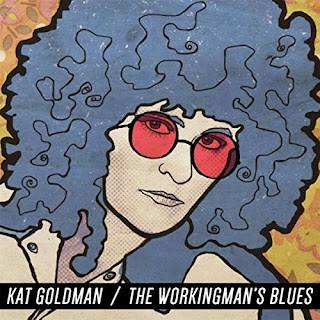 The Workingman’s Blues, the latest album by Toronto-based singer-songwriter Kat Goldman, is an interesting concept album that I gather is based on a difficult relationship she had while living in Boston. As Kat writes in the liner notes, “My anger at the Workingman ultimately had nowhere to go but to turn into compassion, otherwise I knew I would never escape my own suffering… I have tried to tell his story to the best of my ability. The rest of his story, I hope, will be his to tell. I will always love him, and I will never forget him.”

In “Take It Down the Line,” the opening track, Kat seems to be writing from the Workingman’s perspective as he describes working as a truck driver, wanting to escape a generational cycle of violence/abuse, and a desire to start a family of his own.

But most of the other songs are written from the perspective of the woman attempting to maintain and, ultimately, escape from her relationship with the Workingman. These include “Release Me,” in which she tells him “you’re leaving me alone and broken-hearted”; “Put Your Toolbox Down,” in which she seems to be craving his attention; and “The Workingman’s Blues,” in which she begins to express compassion for him and his personal history and an understanding that the relationship really has no future.

This understanding continues to develop over several songs until “It’s Ovaah,” in which she declares to him that the relationship is over and that she’s moving on. But, in “The One to Dream,” she also lets him know that he will always be a part of her; and in “Mr. Right,” she wishes him well and gives thanks for the good times they had together.

In the finale, “Don’t Know Where I’m Bound,” she’s not only given up on the dream of the relationship, but on the American dream as well, as she declares her intent to return to Canada. I don’t know when Kat wrote this last song, but it almost seems like an exiled Canadian’s political commentary in the Trumpian era.

Much of the album has a seemingly (and appropriate) working class rock ‘n’ roll vibe.