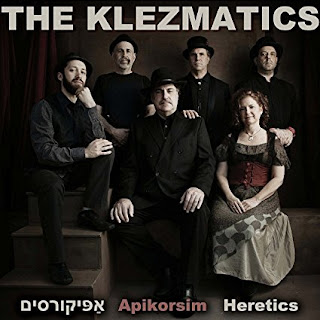 The most recent albums by the Klezmatics were the superb in-concert set, Live At Town Hall, released in 2011 but recorded in 2006, and the Grammy-winning Wonder Wheel, featuring the Klezmatics’ wonderful settings of newly discovered Woody Guthrie lyrics on Jewish themes, in 2006. So, it’s been much too long since we’ve had a new album from perhaps my all-time favorite klezmer band – in fact, one of my all-time favorite bands period.

Apikorsim/Heretics is a return to the kind of progressive Jewish cultural albums the Klezmatics were making in the first half of their now 30-year history: superb material drawn from both traditional sources and their own imaginations  matched by brilliant singing and playing.

In some ways, it’s an album of contrasts. On the one hand, there are songs like “Zol shoyn kumen di geule (May Redemption Come),” a joyous longing for the coming of the Messiah, and “Ver firt di ale shifn? (Who Guides the Ships?),” a contemplative song about God, which express religious concepts which could be embraced by the most fervently Orthodox Jews. On the other hand, there are songs like the equally joyous title track which celebrate a completely secular lifestyle that rejects all of the restrictions of an Orthodox – or even moderately religious – lifestyle.

There are also songs of class struggle including “Der yokh (L’estaca),” a Yiddish translation of a Catalan song, “Kermeshl in Ades (Party in Odessa),” whose joyous music is in contrast to the bitter subtext in the lyrics, and “Vi lang? (How Long?),” which challenges oppressed workers to rise up and overcome their chains in terms similar to those expressed by the likes of Joe Hill or Woody Guthrie.

Among the most poignant songs are “Tayer Yankele (Dear Little Yankl),” a traditional Yiddish song about an economic migrant or refugee who went to Istanbul looking for a better life only to be murdered, and “Der mames shpigl (My Mother’s Mirror),” about the realization so many of us have as we age about how much there is of our parents in ourselves.

One of the most infectious songs on the album is “Shushan Purim,” which celebrates the tradition, practiced by some, of getting so drunk on the holiday of Purim that you can’t tell the difference between Mordechai, one of the heroes of the Purim story, and Haman, the evil villain of the story – but, then, waking up the next day, Shushan Purim, with a horrible hangover. The music to the song was composed by Klezmatics’ trumpeter Frank London, while the lyrics were written by author and Yiddish scholar Michael Wex, my oldest childhood friend.

While all of the songs are sung in Yiddish, the CD booklet includes English translations of the lyrics so there is no language gap for non-Yiddish speakers.

As always, the lead singing of Lorin Sklamberg, is a delight throughout the album as is the playing of each of the Klezmatics. As well as on the arrangements to the songs, their playing is featured on several great instrumentals including violinist Lisa Gutkin’s “Der geler fink (The Yellow Finch),” clarinetist Matt Darriau’s “Three-Ring Sirba,” and Frank London’s “Green Violin.”

Apikorsim/Heretics was released late last year but it arrived just a couple of weeks too late to claim a spot on my best-of list for 2016. But, because I only got to hear the CD this month, it will definitely be in contention for the 2017 list.