Moore & McGregor – Dream With Me 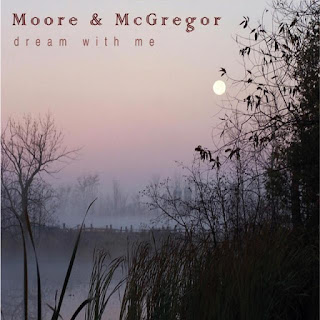 Dream with Me by Moore & McGregor – veteran musicians Wendy Moore (harp, oboe, English horn, pennywhistle, vocals) and Arthur McGregor (guitar, banjo, bodhran, and most of the lead vocals) – is a marvelous debut album of songs and tunes by a duo who have long worked together (often performing kids’ shows as the Celtic Rathskallions) that includes superb original songs by Arthur, traditional Celtic tunes, and several excellent songs drawn from other writers.

Arthur’s writing is most impressive. The album opens with “The McGregors,” Arthur’s up tempo account of his family’s emigration from Scotland to Canada when he was a small child and his and the family’s embrace of their new home more than 60 years ago.

Arthur’s other songs include “Back on the Farm,” co-written with producer Paul Mills, in which the narrator celebrates his return to the family farm, and the farmer’s life, that he forsook as a young man for a nomadic life; “Dream With Me,” a beautiful love song written for Wendy; and the infectious “Dancing Shoes,” a toe-tapper that celebrates dancing and small town life.

Wendy’s contributions as an instrumentalist and occasional harmony vocalist are felt throughout the album but she is at the forefront on “Path of the Paddle,” David Archibald’s lovely hymn to canoeing on which she sings the lead vocal, and the instrumental medley of “The South Wind/The Battle of Glencoe,” two beautiful traditional tunes she plays on the harp.

The rest of the album is equally strong but I particularly love their interpretation of Warren Zevon’s “Don’t Let Us Get Sick,” a song that is a kind of off-centre prayer and affirmation; and their version of “Summertime,” the Gershwin classic from “Porgy and Bess” set at the corner of Folk, Blues and Jazz Streets. Wendy’s oboe playing on this track is positively haunting.

In addition to Wendy and Arthur, the only other musicians are Curly Boy Stubbs (Paul Mills) on guitar, mandolin and percussion and David Woodhead, the always inventive bassist. The arrangements and contributions of all the singers and players always serve the best interests of the songs.

A gem of an album to begin the new year.