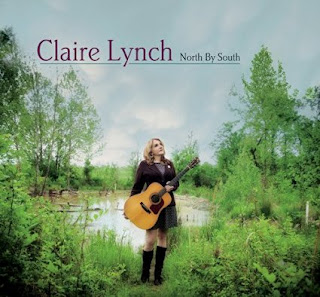 Writing about Claire Lynch’s album New Day in Sing Out! magazine in 2006, I referred to her as “one of the finest bluegrass vocalists of the modern era.” And, indeed, she was/is that. But, as early as that album, if not before, she was also finding inspiration in contemporary folk-rooted styles, singers and songwriters.

On her new album, North By South, Claire specifically finds inspiration in Canadian songwriters – nine of the 10 songs were written by Canadians, most of them familiar to readers of the Folk Roots/Folk Branches blog and to listeners of the radio programs I’ve done over the years in Montreal and Ottawa.

An album of Canadian songs might seem an odd choice for an artist long based in Nashville but Claire was inspired by her recent marriage to a Canadian man – and the other song on North By South is “Milo,” an up tempo tune inspired by her new husband.

Canada, of course, is known for many great songwriters (Canadian Spaces, a radio program on CKCU in Ottawa that I co-host every couple of months or so, is primarily dedicated to Canadian singer-songwriters) and Claire has picked some gems to sing on this album.

Perhaps my favorite track on North By South is Claire’s haunting version of Lynn Miles’ “Black Flowers,” whose narrator is a young mother whose husband was recently killed in a coal mine accident. As I’ve mentioned before, “Black Flowers” is one of the best coal mining songs of recent years.

Other favorites include Old Man Luedecke’s “Kingdom Come,” an infectious melody that has Claire’s voice weaving in and around virtuoso playing by the likes of Béla Fleck on banjo, Bryan McDowell on fiddle, and David Grier on guitar; “Molly May,” J.P. Cormier’s seafaring ballad; Willie P. Bennett’s lovely “Andrew’s Waltz”; “Empty Train,” the compelling title track from David Francey’s latest album; and “All the Diamonds in This World,” Bruce Cockburn’s gentle song of spiritual belief.

“In all honesty, this collection of Canadian songs only touches the tip of the iceberg,” writes Claire in the liner notes. So, hopefully, this is just the first in a series of North By South albums by Claire Lynch.