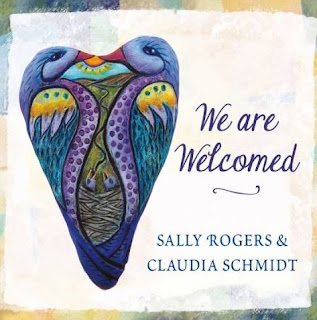 For the fourth time since 1981, Sally Rogers and Claudia Schmidt – both of whom I first met sometime in the ‘70s – have combined their always lovely and frequently powerful voices together in glorious harmony.

We are Welcomed features seven of Claudia’s original songs, three of Sally’s, and four drawn from other songwriters that they make their own.

Among the highlights from Claudia’s songs are a couple of powerful topical songs. “Willful Ignorance,” carries wise advice to those might be seduced by trumpian demagoguery, while “Still on the Bridge” reflects both on the deadly attack on civil rights marchers in 1965 in Alabama as they left Selma and crossed the Edmund Pettis Bridge en route to Montgomery and how, half a century later, we are still, figuratively, on that bridge.

Other highlights from among Claudia’s songs are “Jamaica’s Tree,” a poignant tribute to a young woman from her neighborhood who lost her life at a too young age, and to the resilience of her mother; and the inspiring “Quiet Hills,” a 1994 song from one of Claudia’s solo albums that is re-recorded here with Sally’s magnificent harmonies.

Sally’s songs include the title track, “We are Welcomed,” a zipper song that celebrates new life (or rejuvenated life) with “song,” “joy,” “hope” and “love”; “Prudence Crandall,” a homage to a Connecticut teacher, who, many decades earlier, had been persecuted for breaking the color barrier in her classroom; and “The Tunes Jacqueline Plays,” a tribute to the seemingly magic musical abilities of pianist Jacqueline Schwab (who is the pianist on the album and on this song).

Each of the four songs by other writers is a sublime choice. Neal Hagberg’s “Star Girls” is a heartrending but, ultimately, hopeful tribute to girls and young women who are sold into slavery and/or repressed by religious fundamentalism. Peggy Seeger’s “Love, Call Me Home” is a lovely paean to friendship, while Jean Ritchie’s “The Cool of the Day,” based on a passage from Genesis when Adam and Eve are in the Garden of Eden, is given a stunning treatment with Sally’s lead vocal and Claudia’s harmony.

My favorite of the cover songs is a magnificent version of Sandy Denny’s autumnal masterpiece “Who Knows Where the Time Goes.” There have been many great versions of this song since the late-1960s and this version stands very tall among them. By the way, the drummer on the album, and on “Who Knows Where the Time Goes,” is Dave Mattacks, who was once a member of Fairport Convention with Sandy Denny (although I believe he joined the band after they recorded the song).