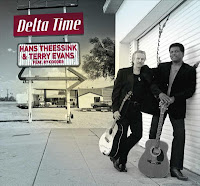 Delta Time is yet another in a series of remarkable albums by the always excellent Dutch, Austrian-based blues singer, songwriter and guitarist Hans Theessink – and his second collaboration with Terry Evans, an outstanding blues and gospel singer, originally from Mississippi, who is probably best known for his sublime harmonies on many of Ry Cooder’s albums dating back to the 1970s.

The album begins with Theessink’s title track – one of five songs which feature transcendent trio harmonies from Evans and colleagues Arnold McCuller and Willie Greene, Jr. – which celebrates a return to what the late folklorist Alan Lomax referred to as “the land where the blues began.” As on the other 12 songs, Theessink’s and Evans’ guitars and voices blend perfectly and lead into a gorgeous slow version of the Delmore Brothers' classic, “Blues Stay Away From Me,” with Theessink’s deep baritone floating on the bottom while Evans’ tenor rides on top. “Blues Stay Away From Me” is one of three songs in which the duo’s guitars are augmented by sweet and distinctive lead guitar lines from Ry Cooder.

The other tracks with Cooder are a groove-inflected version of Bobby Charles’ “How Can People Act Like That” and Theessink’s “Shelter from the Storm (not to be confused with the Bob Dylan song of the same name),” a beautiful love song that also features those amazing harmonies from Evans, McCuller and Greene.

Among my other favorite tracks are terrific, slow acoustic versions of blues classics “It Hurts Me Too” and “Honest I Do,” a fun version of “The Birds and the Bees (Evans sang harmonies on Jewel Aiken’s pop hit version in 1965),” and Theessink’s “Mississippi,” a 10-minute tribute to many of the blues greats – including Evans – who have come out of that state.